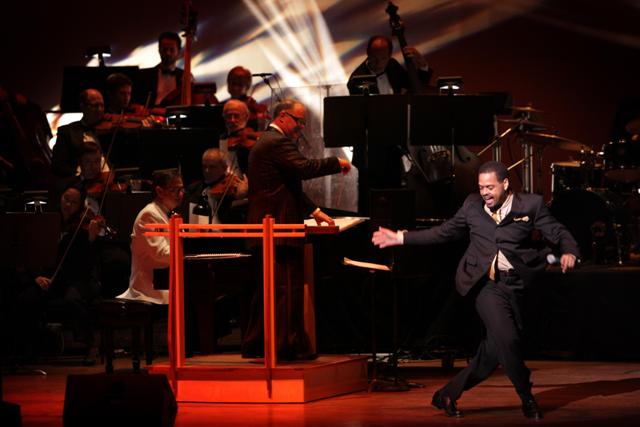 Tap dancer and vocalist Ted Louis Levy performs with the Oregon Symphony in a program of flamboyant dance styles from all over the world -- Let’s Dance! The event riffs off “Dancing with the Stars,” but skips the stars and sticks with internationally-renowned dancers. Two shows are Feb. 28 at 7:30 p.m. and Mar. 1 at 3 p.m. at the Arlene Schnitzer Concert Hall. The program includes tango, flamenco and jitter-bug danced to the music of Leonard Bernstein, Johann Strauss, Jacques Offenbach, Georges Bizet and Camille Saint-Saëns.

Levy made his Broadway debut in the smash hit Black and Blue and returned to Broadway as Papa Jack in Susan Stroman and Harry Connick, Jr.’s Thou Shalt Not. He collaborated with George C. Wolfe and Gregory Hines on the choreography of Jelly’s Last Jam, for which he received a Tony nomination, a Drama Desk nomination and the 1993 Outer Critics Circle Award. He also assisted in the choreography of Broadway’s Tony Award-winning hit Bring in ’da Noise, Bring in ’da Funk. Tickets start at $22 and can be purchased online at any time from the orchestra’s website, www.OrSymphony.org; at the Oregon Symphony Ticket Office, 923 SW Washington St., in downtown Portland; by phone at 503-228-1353 or 800-228-7343; and at the concert hall box office starting two hours before the performance.

On Saturday, March 14, RACC hosts a free information session to help local artists and other community members learn how to organize, fund and navigate two different approaches to creating murals in the City of Portland.

Coffee and light snacks will be provided.

Presenters include Gage Hamilton, an organizer of Forest for the Trees Northwest—a public art mural project that brought twenty artists together in August to paint murals—and Robin Corbo, a local artist known for her skill at organizing and creating community murals. Peggy Kendellen, Manager of RACC’s Public Art Murals Program, and Doug Strickler from the City’s Bureau of Development Services will also be on hand to help participants navigate the two options available for creating an exterior mural on a wall in Portland.

The workshop is free and open to artists, property owners, business owners, and community and neighborhood association members. To sign up, email [email protected] with the subject heading “Public Murals Workshop” and include contact information in the text of the email.

The tenth annual Native Caring Conference will be held on April 15-16 at the Three Rivers Casino and Hotel in Florence, Oregon. All Native Elder caregivers and relative caregivers of children from Northwest Indian communities are invited to attend.

The two-day conference features local and national spokespersons on Caregiver Well-Being, Medication Management, Elder Abuse, Children's Alcohol and Drug Use, and How to Communicate with Health Care Providers.

Registration deadline is April 3rd. The cost is $150 with a $25 discount if registration is received by March 3. The registration fee includes two lunches, dinner, and breakfast.