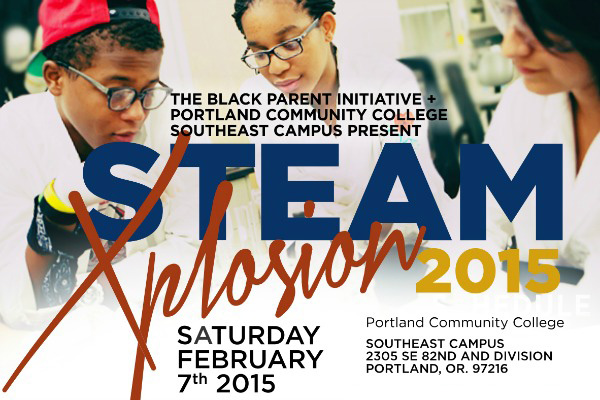 The event will be held at the PCC Southeast Campus on Feb. 7, from 10 a.m. – 2:30 p.m. and will focus on bringing families who are traditionally underrepresented in technology together with inventors, app-developers and engineers.

STEAM, which stands for Science, Technology, Engineering, Art and Math, is an expansion of the STEM acronym, adding in the importance of Art to the sciences.

STEM represents one of the fastest growing sectors of the economy, according to the U.S. Department of Commerce. High paying STEM-related careers are expected to grow 17% through 2018 compared 10% of non-STEM jobs.

These jobs also lack diversity, with a disproportionate amount of white males in STEM careers. Black Parent Initiative organizer Angela Frazier said there is interest in STEM within the African American community.

“This is a field that minorities are underrepresented in -- and not because a lack of curiosity but more so a lack of awareness or a lack of opportunity,” Frazier said.

With the STEAM-Xplosion fair, BPI and PCC will use culturally relevant mentors to reach out parents and their children.

Such as Corey Frazier (no relation to Angela), a self-described “Air-Force Brat,” whose technology career path took him into Aerospace Engineering, where he worked with NASA on the space shuttle. Most recently, his career has brought him to Intel, where he works with supercomputing applications.

The STEAM event has separate offerings for parents and their children. Sessions aimed at parents offer advice on how to nurture their childrens’ interest in STEM and how to advocate for STEM education.

Some sessions for children are divided up by age and gender. There are activities for those as young as 4-years-old with Stacey Sowder’s chemistry demonstrations aimed at the young scientist.

The gendered break-out sessions provide safe places for boys and girls to explore STEM with their peers. Young women are encouraged to attend the Girls Inc. STEM Superstar Challenge with Karin Malbrough. Young men can check out the Brothaman Tech Incubator with Jomo Greenidge.

There are also workshops on application development, forensic science and renewable energy solutions.

According to Frazier, the event is intended to connect people with the ideas in STEM, but also to the people in the community who are using science and technology in their professional lives.

"It’s really nice to have those people that are local that will be there,” Frazier said “It gives young people an opportunity to meet with those people.”

To learn more or to RSVP for the event, click here.