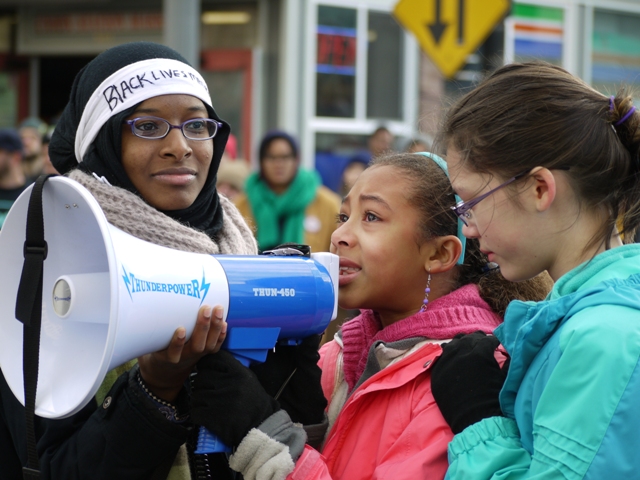 Of The Skanner News
Published: 12 December 2014

Zem Zem Ahmed, a student at the University of Washington holds the bullhorn for 11-year-old Delaney during a march from Garfield High School to Seattle Police headquarters in downtown Seattle on Saturday, Dec. 6 to demand police accountability after grand juries in Ferguson, Mo., and Staten Island, NY,  failed to indict police officers who had killed unarmed black men. Delaney began to cry when she talked about being afraid of what could happen to her own father or family members during an interaction with law enforcement. The marchers stopped and occupied two intersections peacefully before occupying the intersection in front of police headquarters. Susan Fried photo

Experience the sculpture park lit with the glow of hundreds of lights and luminarias with SAM Lights. Make art, listen to music, and take in the sights. Wear your best light ensemble and become a part of the art. Free and open to the public.

Decorate recycled CDs with rhinestones and bling to create a mobile inspired by Mickalene Thomas’ work Hair Portrait Series in SAM’s Pop Departures exhibition. Take your mobile with you on the luminaria walk and hang it in a community installation at the end of the Z path. Embellish and adorn life size shadow puppets with Romson Bustillo and follow them down the park’s path during a musical procession.

Create an intricate cut-paper lantern with Celeste Cooning. Light it up and watch the ornate shadows dance through the park as you move down the candle-lit walkway. Listen to the offerings of local musicians including the American folk sounds of Lydia Ramsey, the blues and folk music of Ben Hunter and Joe Seamons, and the D20 Brass Band.

Grab a hot drink and snack from Taste to take with you on your luminaria walk and enjoy a sweet bite of baklava and sesame twists from local bike food cart, Bikelava.​​​​

For more information go to www.sam.org.

This program will focus on Wright and Bunn-Marcuse's new book, "In the Spirit of the Ancestors: Contemporary Northwest Coast Art at the Burke Museum."

Library events are free and open to the public. Registration is not required. Parking is available in the Central Library garage for $6 after 5 p.m.

Hour of Code was launched in 2013 by the non-profit organization Code.org. It is a global effort to expand opportunities for students to learn about computer science. It is designed to demystify code and show that anybody can learn the basics of coding and computer science.

For this year's Hour of Code activities at the Library, staff from the Pacific Science Center have developed brand new activities focused on students in grades six through eight. Students may drop-in anytime during the two-hour session, and activities will include:

Hardware: Chip’s Challenge - Ever wondered how computers keep getting faster and better? The answer is in the design of their microchips. Become a hardware engineer and learn about transistors, Moore's Law, and how it’s possible to fit all that computing power on one tiny little chip! It's a puzzle solving challenge sure to get your imagination working.

Software Development: A-mazing Robots - Help a robot get through a maze! Become a computer programmer and use a paper prototype to write code to navigate your robot through the maze. Using the software development cycle, edit your code to get the robot through more complex mazes and additional challenges!

Binary Bracelets - Learn the basics of binary code, which computers use to communicate numbers, letters, commands, images and sounds. Create a personalized beaded bracelet with your initials expressed in binary code.

A King County resident is negative on initial testing for the Ebola virus, according to results released last week by the Washington State Department of Health, Public Health Laboratory. The individual had recently returned from Mali, a county with a small number of Ebola cases, and had developed a slight fever yesterday.

Following guidance from the Centers for Disease Control and Prevention (CDC), Public Health – Seattle & King County had been monitoring him for possible Ebola symptoms. In addition to the fever, the patient also had a sore throat but none of the other typical symptoms to suggest Ebola infection. The individual was evaluated at Harborview Medical Center on Saturday afternoon, after a fever had developed that morning. He is considered to be at low risk for Ebola, but tests were conducted as a precaution.

Public Health – Seattle & King County routinely monitors the health of travelers arriving from Ebola-affected countries. During the cold and flu season, there may be other people under monitoring that develop symptoms that are similar to Ebola, so it’s possible that other travelers will require tests in the coming months.

Catch a free screening of popular movies, including "Guardians of the Galaxy" and "22 Jump Street" through mid-January at The Seattle Public Library, Northgate Branch, 10548 Fifth Ave. N.E.

Northgate Branch patrons had the opportunity to vote on which films they wanted shown at the Library. Times, dates and film titles are outlined below.

Library events and programs are free and open to the public. Free parking is available at the branch. Space is limited to 60 people and the films are all ticketed events. Free tickets will be available at the circulation desk 30 minutes before the movie starts.