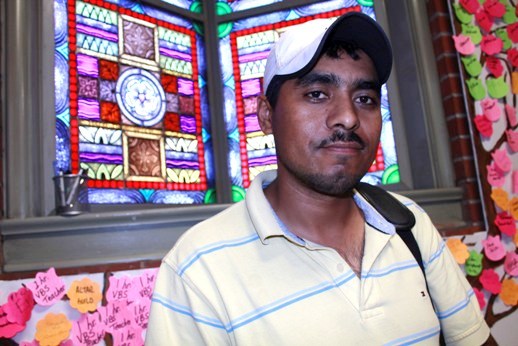 Francisco Aguirre in front of a stained-glass window as he took sanctuary at Augustana Lutheran Church. Photo by Helen Silvis

After several months, Francisco Aguirre will finally be returning to where he belongs: home. Augustana Lutheran church took him in as a place where Francisco could find refuge from the actions of ICE to label and pursue him as a criminal without a warrant on September 19th. Francisco knew his rights and had deep roots in the community.

The campaign formed immediately to organize around the clock. Over the past few months the coalition garnered thousands of supporters from all over the country to continue to protect him and elevate the unjust treatment of our undocumented community members by local law enforcement and ICE.

Leading local and national partners such as IMIRJ (Interfaith Movement for Immigration Justice), Voz Worker’s Rights Education Project, Jobs with Justice, Migrant Workers Collective,Saludo, Son Clandestino, Portland Immigrants Rights Colaition, worked with community activists and leaders to gain support including Portland Mayor Charlie Hales. For the past several months, the coalition raised thousands of dollars, had almost weekly direct actions, hundreds of endorsements and petition signatures, and worked around the clock to figure out how to get him home.

Francisco left sanctuary to attend a court proceeding at the Clackamas County Courthouse where law enforcement was waiting and took him to the Multnomah County Detention facility. The temporary victory came when a federal judge demanded that ICE not pursue him and was released. The coalition sees this as the strongest possible time for him to leave, and will continue to be there to support him with his January hearing, and other families like the Aguirres who needs support.

“This was no mistake. Thanks to the efforts of hundreds who protest our inhumane immigration policy I can now return home. I thank each and every person who supported our campaign, and ask them to support my brothers and sisters who are not as fortunate” said Francisco Aguirre.