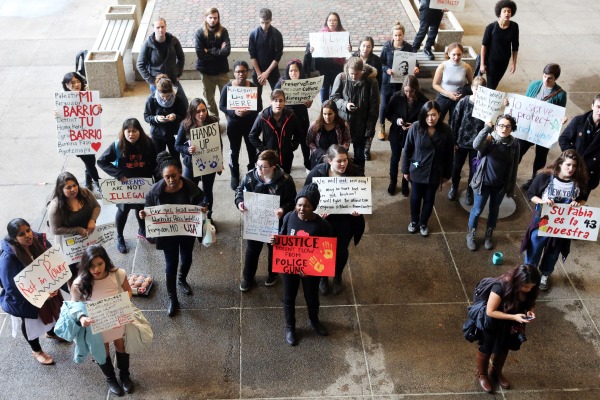 Of The Skanner News
Published: 01 December 2014

Protesters gathered in Salem, Or last week following the grand jury's decision not to indict the officer that shot teenager Michael Brown six-times, killing the 18-year-old.

Forums and protests continue in the wake of Officer Darren Wilson’s non-indictment after shooting and killing Michael Brown Jr., in Ferguson, Mo. this summer.

The organization Don’t Shoot Portland is planning another demonstration against police brutality at City Hall at 1 p.m. today.

Youth up to age 35 will have the opportunity to gather and speak at June Key Delta Community Center (5940 N. Albina) Dec. 2 at 7 p.m. The organizer of the event, Portland Black Youth Forum, is asking that people honor the request for it to be a space for young people of African descent.

“Conversations led by youth internationally, are being had about the dehumanization and brutality of Black bodies. We need to come together to determine what this work looks like in Portland, Oregon,” reads the event’s Facebook description. For more information on this event, contact organizer Ebony Oldham by phone at 503-302-2322 or email her at ebonyoldham@gmail.com.