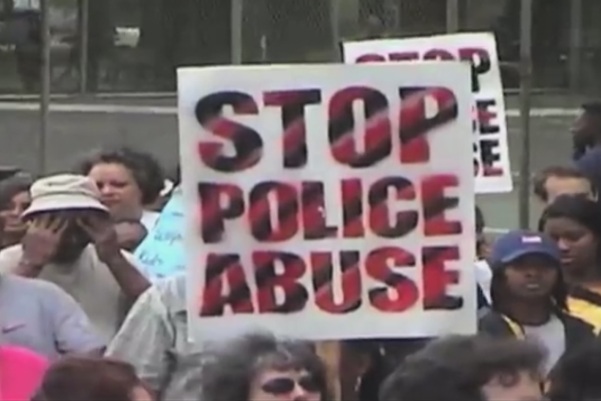 The unique history of police violence in Portland is getting a new lens, with the upcoming documentary ‘Arresting Power.”

Over the last two years filmmakers Jodi Darby, Julie Perini, and Erin Yanke have been conducting research and shooting and collecting interviews focusing on the stories of people who have been killed by the police, people who’ve survived Portland police brutality, and those who have organized against such violence.

“As media artists and community activists, we have spent time in meetings, on the front lines of protests and behind cameras and microphones collecting stories of local police issues for the past 15 years.Arresting Poweris the culmination of that work,” they say.

Recently, the seasoned community activists were given access to Oregon Historical Society’s film archives which includes footage of resistance efforts throughout the past 50 years from organizations like the local chapter of the Black Panther Party, Portland Black Berets, and others.

Offering political and historical analysis to policing in America, the film documents the interconnectedness of aforementioned efforts to current accountability and city government change efforts like Portland Copwatch and Portland Community Liberation front.

Community leaders like Albina Ministerial Alliances’ JoAnn Hardesty and Dr. Leroy Haynes Jr., Walidah Imarisha, author of The Oregon Black History Timeline, Dan Handelman from Portland Copwatch, and Kent Ford, founder of the Portland Chapter of the Black Panther Party are just some of those interviewed for the film.

Arresting Power is set to premiere Jan. 2015 at the Northwest Film Center, after which the filmmakers will distribute the film and screen it at national and international festivals, universities, libraries, activist spaces and other community centers.

Though the film is mostly complete, a crowdfunding effort via Kickstarter has been launched by the film to help cover the costs of final editing, distribution and outreach efforts, shipping and travel fees, and finally to pay for footage of film obtained from the Oregon Historical Society, which costs $6-a-minute to use.

Filmmakers Darby, Perini, and Yanke say the ultimate aim for the film is to have it act as an organizing tool and provoke dialogue around alternatives to the current system of policing and strategies to “keep communities safe without the threat of constant surveillance and ubiquitous violence.”

For more information on the film visit its official Facebook page at facebook.com/arrestingpower and to consider contributing  to their current crowdsourcing effort ending Dec. 7 visit Kickstarter and search “arresting power.”