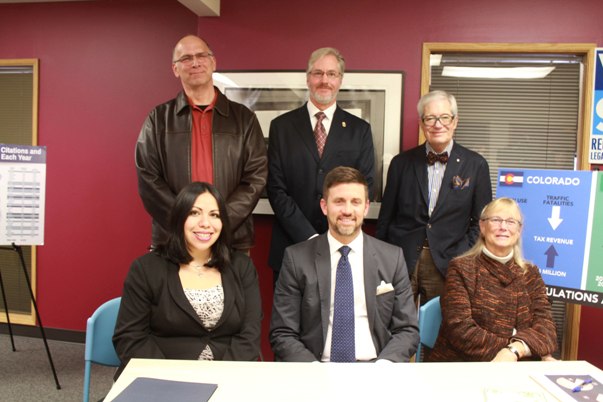 Why Your Vote Matters

Two former sheriff’s deputies, two former prosecutors and a retired Oregon Supreme Court Justice came together to urge voters to Vote Yes on Initiative 91 and make marijuana legal in Oregon.  In a press conference at the advocacy nonprofit Partnership for Safety and Justice, each gave a list of reasons why legalizing, taxing and regulating marijuana will lead to more respect for the law, less wasted time for police and prosecutors, save $50 million a year spent on marijuna enforcement, and prevent 12,000 Oregonians a year from getting a hefty, $650 ticket and a record that can hurt them for years.  Pictured here back row from left: Pete Tutmark, former sheriff’s deputy; Paul Steigleder; former Clackamas County sheriff’s deputy; retired Oregon Supreme Court Justice William Riggs. Pictured Front row from left: Cassandra Villanueva, director of organizing and advocacy for Partnership for Safety and Justice; Darian Stanford, former Multnomah County Deputy District Attorney, Chris Olson, former United States Attorney for the District of Oregon.

Lt. Col. Alex Jefferson, one of the last Tuskegee Airmen ,speaks  in Portland, Wednesday, Nov.5 at 7 p.m. at Lewis & Clark College Agnes Flanagan Chapel. Admission is free.
Lt. Col Jefferson speaks about his wartime experiences as well as what it was like to be a young black man during the war years in America. Jefferson was shot down during one of his missions over Germany and spent time in a German POW camp. Following the war he continued to serve others by teaching and inspiring students to do their best.
Following his address Lt. Col. Jefferson will sign books during a reception. Members of several other veterans of color groups plan to attend the discussion. More information at www.college.lclark.edu/live/events

‘The Wake of Vanport’

Immediately following the screening there will be an opportunity for discussion with survivors and producers. Refreshments will be served. Admission is free.

The Vanport Multimedia Project is an ongoing project of The North Portland Multimedia Training Center (NPMTC) to collect and archive oral history from individuals in the Portland African American community.

For more information go to www.npmtc.org.

East Portland legislators host a Town Hall Nov. 6, about Northeast 82nd Avenue opportunities.  The event is Thursday, Nov. 6, 6:30  to 8 p.m. at PCC Southeast Center (Community Hall), 2305 SE 82nd Ave.
Hosted by Sen. Michael Dembrow and Reps. Alissa Keny-Guyer and Barbara Smith Warner, the event includes a presentation from ODOT on their current planning process for an 82nd Ave. transportation study, information about transferring 82nd Avenue from the state to the city of Portland, and an update on potential funding sources for improvements.  With the 2015 legislative session approaching, now is a great time to get plugged in. There will be time for public comments, and brief remarks from legislators.

Portland Community College will be offering free parking for this event.

The Regional Arts & Culture Council is now accepting applications for mural funding through its Public Art Murals Program. Applications are due the first Wednesday of every month through June 2015.

Applications and guidelines are available at racc.org/public-art/mural-program. Proposals must be submitted by 5 p.m. on the first Wednesday of every month. RACC’s review and approval process takes 4-6 weeks, and all proposals are reviewed by the Public Art Murals Program Committee, whose members include artists, arts advocates and other creative professionals. For more information, contact Peggy Kendellen, public art manager, at 503-823-4196 or kendellen@racc.org.

On Saturday, Nov. 8 from 10 am to noon, RACC will offer a free workshop to help artists understand the mural application process at the Rosewood Initiative, 16126 SE Stark St. For more information and to RSVP, contact Peggy Kendellen, public art manager, at 503.823.4196 or kendellen@racc.org.

Another route for painting a mural in the City of Portland is through the city’s Original Art Mural Permit, which has different requirements and a fee of $50. Funding is not available through the City’s permitting process. Visit www.portlandoregon.gov/bds/50737  for more information.

Admission is $5 for the day.  Clark College students and children under 12 accompanied by an adult are admitted free of charge.

For more information go to   http://www.clark.edu/campus-life/arts-events/music/choral/index.php.

Texas State Re p. Mary González will be the featured speaker at Washington State University Vancouver's fall Marquee Diversity event. González, who has twice been featured in Latin Leaders Magazine for leadership in education and politics, will speak at 7 p.m. Nov. 6 in the Dengerink Administration Building, Room 110.
Her talk is titled "Identity Culture and Social Justice: How Tortillas and Rainbows Taught Me to Change the World." She will discuss her personal identities as a member of the Latino and LGBTQ communities, and how they intersect with each other and her work. She will also talk about what inspires her to advocate for social justice, and how members of the audience can affect positive change in their communities.
González has been recognized as one of "10 Next Generation Latinas" by Latina Magazine and one of 10 newly elected politicians in the nation to watch. She has held positions at the National Hispanic Institute and Southwestern University and serves on the board of directors for allgo, a statewide organization in Texas for queer people of color.
The event is free and open to the public. You can reserve a seat online at vancouver.wsu.edu. Click on the events calendar and locate the event.

Documentary about Mental Health and the Military

What: Portland screening of “Mind Zone,” a documentary on mental health and the military by filmmaker, clinical psychologist and Portland State University professor emeritus Jan Haaken, part of the 41st Northwest Filmmakers’ Festival.

“Mind Zone” follows therapists with the 113th Army Combat Stress Control detachment as they carry out two conflicting missions: protecting soldiers from battle fatigue and keeping these same soldiers in the fight. With psychiatric casualties mounting, the United States Army ups the deployment of mental health detachments to war zones—an undertaking on a scale previously unimaginable. As the 113th is deployed to Afghanistan and trains for their dual roles as soldiers and healers, Colonel David Rabb and his team of therapists are equipped with a wide arsenal of psychological techniques. The documentary moves between the battle zone and the home front, offering a rarely seen glimpse of heated debates within the field of psychology over diagnosis and treatment of combat conditions and the limits of using categories such as post-traumatic stress disorder to capture the psychological impacts of warfare. (50 minutes)

For more information on the film, go to www.mindzonemovie.com