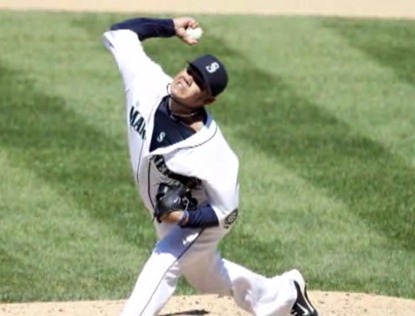 Hernandez, the 2010 American League Cy Young Award winner, retired all 27 Tampa Bay Rays batters in order as the Mariners beat the Rays 1-0 at Seattle's Safeco Field. He struck out 12 of those batters, including the last one, third baseman Sean Rodriguez.

This is the third no-hitter and second perfect game at Safeco Field this season. Philip Humber of the Chicago White Sox threw a perfect game against the Mariners on April 21, and six Seattle pitchers combined to hold the Los Angeles Dodgers hitless on June 8, according to mlb.com.

Matt Cain of the San Francisco Giants threw the other perfect game this year, a 10-0 gem against the Houston Astros on June 13.

Johan Santana of the New York Mets and Jered Weaver of the Los Angeles Angels have thrown no-hitters this season, but both pitchers allowed batters to reach base.

Hernandez's feat was the fourth no-hitter in Mariners history. Randy Johnson threw one in 1990 and Chris Bosio had one in 1993.