Helen Silvis of The Skanner News
Published: 31 May 2012 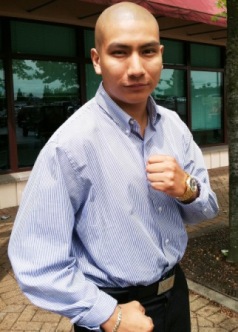 With his sights set on the 2016 Olympics, boxing hopeful Juan Rogel has packed a lot into his short life. Raised in Mexico and North Portland, he had no parents to steer his path. But with help from Portland's outreach workers and staff at Roosevelt High School, Rogel managed to rise above the pull of street gangs.

"You want that support and you want respect," he says about his feelings as a struggling high school student.

Rogel graduated with a high GPA, and has now graduated from Heald College with a paralegal degree –all while working to support himself at McDonalds. He shared his success at the Gang Task Force meeting at the Northeast police precinct May 25 and received an ovation.

Rogel's long-term personal ambition is to make the boxing Olympic team. Training at Knott Street and Grand Avenue boxing clubs, he has been sparring with professional boxers and getting encouragement to fight the best amateur boxers.

"I'm 21 and now I can go anywhere," Rogel said. "So I have to think about do I want to become a Pro or stay in amateur?

"My coach says I have got a chance to go to the Olympics. I'm ready. They think I'm at that level. So I want to find an Olympic match and then if I win that do another. If I keep winning those competitions I can become part of an Olympic trial. They say I have a shot."

Next up for Rogel, is Air National Guard boot camp, where he is heading in June. He's actively seeking work as a paralegal and hopeful that he will find something soon.

"I haven't been finding anything as a paralegal, so I'm open to working as a receptionist or any office work," he says. "I just need a chance to show my professional skills."