Portland: Two More Chances to Speak Up on Affordable Housing 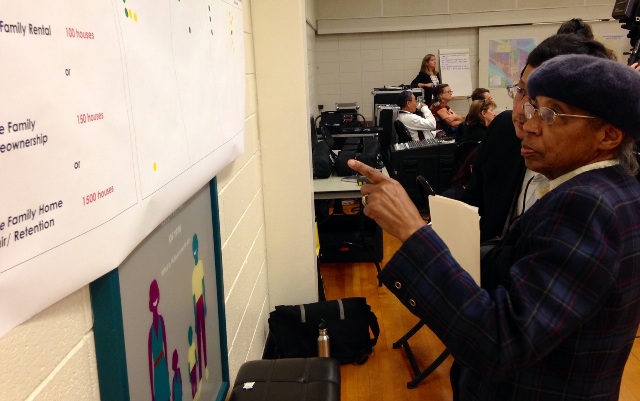 The Portland Housing Bureau is wrapping up its series of community forums to solicit public input for a $20 million investment earmarked for affordable housing in North and Northeast Portland.

The events are held in a group discussion format, with participants asked to share their stories about housing and their ideas for what is needed.

The Skanner News caught up with Housing Bureau Director Traci Manning and International Fellowship Family Bishop Steven Holt, a member of the Community Advisory Committee to the North-Northeast Neighborhood Housing Strategy Committee, to ask them about the public hearings. Find out more about them also by clicking here.

The Skanner News: Why are these hearings important and how many people have you heard from so far?

Bishop Steven Holt: The forums are important to gain the perspective and hear the desires of the individuals who have been directly affected by gentrification. It is a rare and genuine opportunity to hear the collective voice of people—young and old, from all ethnicities—who have been impacted.

Traci Manning: The first two forums have each attracted nearly 150 community members. We’ve been pleased to have such a strong turn out, but what has been most exciting is the level of participation—everyone has been so engaged.

These are really are more like group discussions than formal hearings. We are collecting input and ideas, rather than testimony. Attendees break into small groups with Portland Housing Bureau staff and share their challenges in the rental market, barriers to owning or keeping their homes, and they vote on their priorities for how the money should be invested. They also get to ask questions of city staff, community partners, and each other. There’s a lot of dialogue and sharing, which was our goal.

The forums are important because it gives us an opportunity to acknowledge the history in these neighborhoods, to be clear that we don’t have all of the answers, and create space for people to tell their stories and the experiences they have lived and are living now. Engaging the community in decisions about where they live is critical  to ensuring that our communities of color, our young families, and our elderly and disabled neighbors are included in the economic growth of our neighborhoods, not harmed by it.

TSN: Where did the $20 million come from?

Traci Manning: The $20 million was originally part of the Portland Development Commission’s budget for the Interstate Urban Renewal Area over the next five years. Mayor Hales proposed and the Board of the Portland Development Commission and City Council agreed to transfer those funds to the Affordable Housing Set Aside to be used in response to community concerns that commercial development planned for the Interstate Corridor had priced residents out of their neighborhoods.

TSN: How far will $20 million go in terms of constructing affordable housing in Portland?

Traci Manning: There are a few different ways the money can be invested, which is why it’s important we hear from as many community voices as possible about their needs. We can invest in building apartments, creating pathways to homeownership, or we can help people stay in their existing homes, but some options cost more than others. $20 million dollars is the equivalent of 300-500 rental apartments or 100 rental houses. It could also be used to move about 150 households into homeownership, or provide support for around 1,500 households to repair or retain their existing homes. Homes for larger families or that are more affordable cost more per unit, but also may be what is most needed. The final result will likely include some combination of these options.

TSN: Is there a weathervane quick take on which ideas/suggestions have been most commonly made so far?

Traci Manning: It’s hard to say anything definitive until we’ve had a chance to compile all of it, but we’ve heard ideas from homeowners—especially elderly homeowners—on how important it is to them to be able to keep their homes in their families. We’ve heard a lot from people who, because of incomes, don’t have any choices in the neighborhoods anymore, and a rent they can afford that won’t skyrocket is a huge priority. Overall, what we have heard is the need for a combination of strategies that includes both support for affordable rental housing and pathways to home ownership.

TSN: What will come of this public testimony on the $20 million?

Bishop Holt: The purpose is to collect data, communicate with the members of the public who are showing up, and make a recommendation to City Council. But more than that, the hope is to right some wrongs and give the opportunity for a displaced people to gain some traction and experience compassion. If community is going to be built, it will require some significant effort to undo what has been done.

TSN: Is there a timeline on when any of the suggestions will be implemented?

Traci Manning: We expect to have the results compiled in November, at which point we’ll send them out to everyone who has signed up for our email list—whether it was at a forum or online, or anyone who called us on the phone. The public will have a week to get back to us and let us know if we got it right or if we missed anything important. We’ll present the final recommendations to City Council at the end of the year. Importantly, we’ll keep the community involved and the work accountable by forming a community-based advisory group to monitor implementation. Then we’ll make the first of the money available for recommended projects. The full investment will take place over the next five years, so it will be ongoing. We want the process to be very transparent for the public, so we’ll make regular updates of our progress to the committee in public meetings as well as on our website.

TSN: Anything important about this issue/process I haven’t asked you about?

Traci Manning: We’re really appreciative that so many people have taken time out of their lives to engage in this process. It’s important that we hear from as many voices as possible in order to make decisions that best meet the needs of the community, so we hope that we continue to have successful turn-outs for the next two forums this week: on Thursday evening at Gresham City Hall and Saturday at 9:00am at New Song Community Church on Martin Luther King Blvd. We are providing food, child care, and translation services. More information and an opportunity to provide comments online is available on our website at Portlandoregon.gov/PHB

Also, the forums wrap up this week, but this isn’t the end of community involvement in this process. There is a stronger focus on community accountability and community partnership than there has ever been in this kind of planning. This process began with the community and it will be monitored by a community advisory board throughout implementation. Community leaders like Bishop Holt have been deeply involved since we began this process and are committed to seeing it through in partnership with us.

Bishop Holt: This is about much more than $20 million. It is one of the rare moments in life where we have the opportunity to engage with public policy and shape things in a way that really matters. This is bigger than $20 million—it is about establishing some principles that set how business is done in Portland. This is a moment to think beyond ourselves and right now, and to think about the next generations and how community will impact them.

As people of color, we have to show up as a people and we have to lend our voice. For too long we have complained about how things are done and what has happened to us, but we don’t act on things when we have a chance. I challenge Portland now to show up, speak up, and step up.