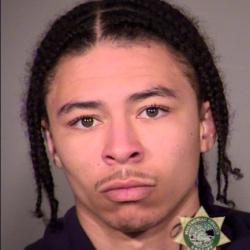 Portland Police Bureau's Gang Enforcement Team has arrested Patrick Shariff Paden, 18, and charged him with attempted murder, attempted assault and unlawful use of a weapon.

Paden is suspected in a shooting, April 27, in the area of Northeast 9th Avenue and Stanton Street. After callers reported hearing shots fired, police found evidence of gunfire, including at least one house and one vehicle hit.

No victims were located, but the gang team’s investigation arrest turned up evidence that led to the arrest of Paden. He was arrested Thursday, Oct. 2 at North Albina Avenue and Killingsworth Street.

GET detectives then worked with investigators from the Vancouver, Wash., Police Department to serve a search warrant in Clark County related to the case.

Anyone with information about gang and/or gun crimes in the City of Portland is encouraged to provide information to the Portland Police Bureau's Tactical Operations Division at (503) 823-4106. Tips on gun crimes can be emailed to GunTaskForce@portlandoregon.gov.