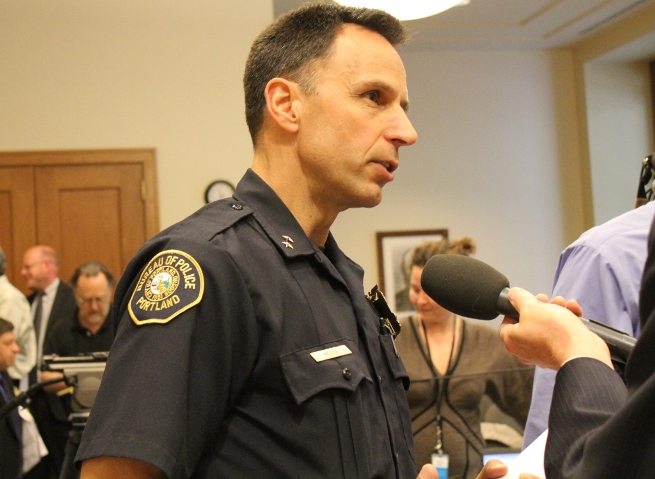 The City of Portland has announced three finalists for the position of Compliance Officer/Community Liaison to monitor the civil rights settlement between the city and the Department of Justice. Judge Michael Simon approved the settlement Aug. 29, with the requirement that the Compliance officer make an annual report to the court.

The city also released a list of community organizations who will advise on the hiring process. On that list are:

But Renaud says he won't be taking part unless the city finds better candidates. "In a hiring process like this, for a job paying close to a quarter of a million dollars, you should expect to get 200 candidates not 12," Renaud says.  Renaud says the city didn't advertise the position sufficiently.

"They need to write a letter to the judge and say they didn't do a good job. It's not the community's mistake, although the community is  paying for this, and we don't need to rubber stamp a bad hire because time is running out."  Read Jason Renaud's commentary here.

The City of Portland is moving forward with the latest requirement of a police-reform agreement crafted with the U.S. Department of Justice: hiring a Compliance Officer/Community Liaison to oversee the City’s compliance with those reforms.

On Aug. 29, Federal Judge Michael Simon approved the settlement between the DOJ and the city.

The three candidates are:

● John Campbell of Campbell DeLong Resources Inc., a Portland firm that has provided research, training, facilitation, and planning for the purpose of public safety problem-solving, community-oriented policing, and the goal of more effective law enforcement results since 1989.

● Dennis Rosenbaum of Chicago, executive director of the National Police Research Platform, which oversees a seven-university research program in more than 100 U.S. cities, funded by the National Institute of Justice, Department of Justice, to advance the current state of knowledge and practice in American law enforcement.

● Daniel Ward of Portland, executive director of the Oregon Drug and Alcohol Policy Commission and a former CEO (2009-12) of  Metro Crisis Services Inc. in Colorado.

“We are pleased to continue moving forward with the letter and spirit of the Department of Justice settlement, through the process of hiring the Compliance Officer/Community Liaison,” Mayor Charlie Hales said. “Since the request for proposals became public in January, these candidates have shown great patience as we have worked through the process. This is a major step forward in the city’s commitment to the settlement.”

“I encourage all Portlanders to engage in this process, first to advise on selection of the Compliance Officer/Community Liaison and then in the crucial work of making Portland a safer place for people experiencing mental illnesses,” said Commissioner Amanda Fritz, a retired psychiatric nurse.  “The Settlement Agreement clearly assigns responsibility and accountability for police actions to all five Council members.  I am eager to do my part to ensure equitable treatment of every citizen, with respect for all.”

Twelve people initially applied for the position in January. Assessment of the applications has been coordinated by Joe Wahl, Deputy Director of the Office of Equity and Human Rights, in partnership with Commissioner Fritz and a planning committee of City staff and community members. Panels of reviewers – including community members with experience in mental health care services, the Albina Ministerial Alliance Coalition for Justice and Police Reform, and city staff – chose the three candidates to be interviewed.

The DOJ settlement requires the City to identify a list of three potential candidates for public review, from which the City Council will select one.

The candidates will be interviewed on Monday, Sept. 29. Community members are welcome to observe.  The initial presentations by the candidates will be broadcast on Channel 30 via Portland Community Media, and the video posted on the City’s website. With input from the Albina Ministerial Alliance Coalition and advocates for people experiencing mental illness, an advisory group has been created to help work through the selection process for hiring the COCL.

The City Council also will interview the candidates, in addition to the community process.  The City Auditor, Portland’s sixth elected official, was invited to participate in these interviews but declined.

“While I appreciate the invitation to participate in the interview of the three COCL candidates, I must recuse myself from that process,” said Auditor LaVonne Griffin-Valade.  “The person hired in this position will be responsible for evaluating a number of aspects of the City’s compliance with the DOJ agreement, including the work of the Independent Police Review (IPR) division in my office.  My participation in the selection process would create a serious and inappropriate conflict for my role as City Auditor and as the elected official charged with oversight of IPR.”

Following the interviews on Sept. 29, the DOJ Settlement requires a 30-day public comment period for community advice to the Council on which candidate should be selected. Public input will be welcome through Oct. 29. An email address and phone number for comments will be announced on Sept. 29.

The Council is expected to enter into contract negotiations later this fall.

After the hiring of the Compliance Officer/Community Liaison, the next step is the creation of a Community Oversight Advisory Board, or COAB, to work with the COCL on assessing whether the Police Bureau and the City are meeting the terms of the DOJ agreement.

“I want to thank Commissioner Fritz and the advisory group for their work,” Hales said. “As a Portlander, and as Police Commissioner, I take these issues seriously, and so does the community. Hiring the compliance officer is a major step forward for the City Council. I look forward to having the officer’s independent assessment of the positive changes already made as well as advice about how to implement the remaining tasks.”