WWI Hellfighter Closer to Getting Medal of Honor Award 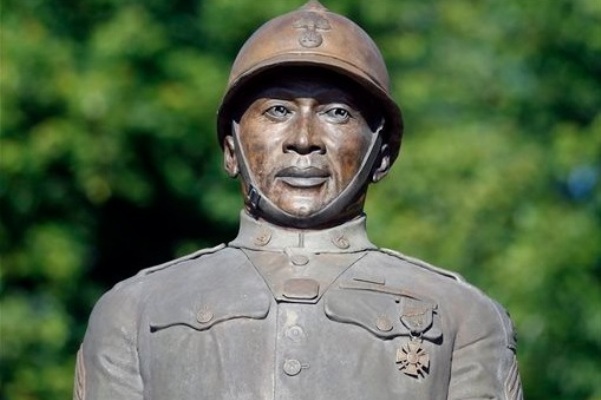 Photo: Sgt. Henry Lincoln Johnson was from New York. This statue of him is located in Albany, N.Y.  Photo from The Associated Press

Harlem Hellfighter Henry Lincoln Johnson is another step closer to being the second black WWI hero to be awarded the Medal of Honor.

Secretary of Defense Chuck Hagel has recommended the honor for Johnson, who fought off several German soldiers to save his comrade Neadom Roberts. Two more steps remain before the award can go forward. The Senate must vote to approve it because it is more than five years since Johnson's acts of bravery. Finally President Obama would have to approve the award.

The Skanner published a story, (see below) and Portland City Commissioner Nick Fish drew it to the attention of Sen. Ron Wyden (D-Ore.). Fish has a personal interest in the issue because his grandfather Hamilton Fish commanded Johnson's regiment, the 369th, known as the Harlem Hellfighters. Sen. Wyden started working with Sen. Charles Schumer (D-NY) and Schumer's staff turned up fresh evidence to support the case.

The records they discovered confirmed accounts of Johnson's heroic actions on May 15, 1918. General Pershing mentioned the incident in a memo and Roberts wrote a personal account.

Sen. Schumer will sponsor a bill in Congress to approve the honor.

"Johnson should have received this recognition 95 years ago, and providing an exemption for him now is the right thing to do," Schumer told The Associated Press.

Read The Orgonian's Editorial, "It's never too late to honor a real war hero."