Man Charged After Brandishing Air Pistol at I-84 Freeway Ramp 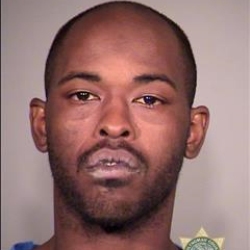 A 27-year-old man was shot by police Monday after brandishing a gun on an entrance ramp to the I-84 eastbound freeway. Denorris Laron McClendon was booked into the Multnomah County Jail on multiple charges after being treated and released from a Portland hospital.

McClendon has been charged with 12 counts of Menacing, two counts of Reckless Endangerment and two counts of Disorderly Conduct in the Second Degree. He was arraigned Tuesday in Multnomah County Court.

Officer Michael Honl, a 17-year-veteran of the Portland Police Bureau assigned to East Precinct, was the officer who shot McClendon, police say.  Callers told police the man appeared to be trying to carjack drivers leaving the freeway at 122nd Avenue.  He was reported to be pointing the gun at drivers. The gun turned out to be a black, replica semi-automatic air pistol. 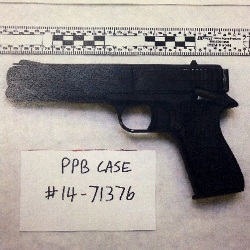 PHOTO: The gun McClendon was brandishing turned out to be this air pistol

Once police arrived, McLendon pointed the gun at an officer then ran through traffic on the freeway. Multiple officers arrived in the area and all freeway traffic was shut down. The freeway was closed down for four hours as officers tried to contain the suspect.

At some point an officer fired shots and struck McLendon. He ran away before collapsing at 112th and N.E. Fremont Street.

The Special Emergency Reaction Team and Crisis Negotiation Team responded to the man and, using an armored vehicle, they took him into custody and rendered medical aid.

Homicide detectives are investigating, standard procedure in officer-involved shootings. Detectives learned that McClendon initially had contact with Portland Police officers at around 8 p.m.  Sunday Aug.  31. Honl will be interviewed Wednesday. Other witnesses including 10 officers and civilians have already spoken to investigators.
Police answered a call from McClendon's grandmother, who told them McClendon was suffering from a paranoid delusion, and was in the backyard of her home swinging a wooden dowel at shrubbery, looking for the FBI. She told officers that he had been doing this for a good part of the day.

Additionally, she told officers that McClendon had broken both arms approximately 4 days earlier and had removed both casts himself.

Officers spoke with McClendon and noted the apparent injuries to his arms and he agreed to go a Portland hospital by ambulance, where he was placed on a police hold for a mental health evaluation and medical treatment.

Detectives said that he was released from hospital and went on use methamphetamine. Soon after police responded to the 9-1-1 calls on I-84.