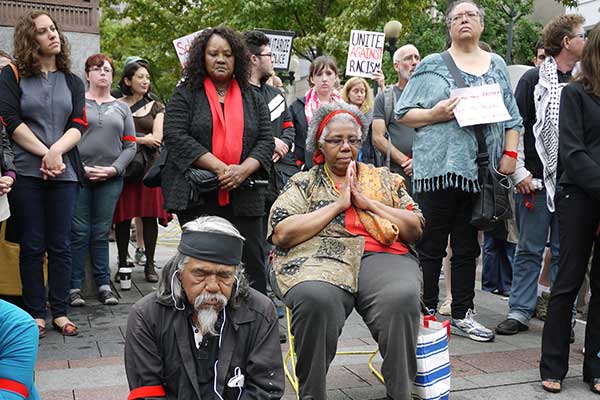 PHOTO: Harriet Walden, founder of Mothers for Police Accountability, led about a hundred people in a moment of silence for Michael Brown, an unarmed teenager in Ferguson, Mo.,who was killed by the police.  The event, held on the corner of 4th and Pine, was one of a hundred vigils held across the country on Aug. 14. Susan Fried photo

On Thursday night, over 50 community members will gather at Pratt Park to demand justice for the recent killing of Michael Brown in Ferguson, Mo. The event is Thursday, Aug. 21 at 5:30 p.m. at the corner of 20th Ave S & E Yesler Way.

Still reeling from the shooting of yet another unarmed black man, the Seattle King County NAACP will hold a remembrance ceremony to honor Michael Brown and his family, and call for justice for victims of police brutality.

In addition to a speaking program, attendees will release hundreds of black and brown balloons in memory of people of color that have been killed by the police.

Speakers include Gerald Hankerson, president of the Seattle King County NAACP; William Wingate, 69 year-old man recently arrested because a police officer was threatened by his golf club which he used for a cane.

For more information go to http://seattlekingcountynaacp.org.

'Don Quixote and Sancho Panza' at The Central Library Sept. 13

Library events and programs are free and open to the public. Registration is not required. Parking is available in the Central Library garage for $7.

The play is a comedic adaptation of Cervantes' classic 17th-century novel, "Don Quixote." It depicts the friendship of two homeless Latinos who meet in an emergency room in modern-day Seattle. Together they face the perils of chronic alcoholism and mental illness head-on as they navigate the winding streets, shelters and health care system.

A nurse practitioner degree program at Washington State University will recruit six students from underrepresented groups through a new grant from the federal Health Resources and Services Administration.

The two-year grant of $264,000 will allow the WSU College of Nursing to offer financial support to students who are U.S. military veterans, rural-dwelling Hispanics and/or Native Americans to help them become family nurse practitioners.

In addition to recruiting six new students from underrepresented groups, the grant will allow the College of Nursing to develop and implement strategies to ensure the success of those students.

Learn more about the WSU College of Nursing at www.nursing.wsu.edu.

The Seattle Seahawks and American Family Insurance have partnered with music promoter Live Nation to present a new talent competition entitled "Dream Show Seattle." Beginning on Aug. 22 against the Chicago Bears, the contest will span the regular season with the winning band performing live at halftime during the Seahawks regular season finale on Dec. 28 against the St. Louis Rams.

Attendees will have the opportunity to vote for their favorites during the performances, or fans can visit www.seahawks.com/dreamshowseattle to view concert footage from each competition and cast their votes.

From 7-10 p.m. on Saturday, Sept. 6, the Seattle Japanese Garden will light up lanterns, luminaries and floating boats to welcome the full moon in keeping with Japanese tradition.
The community is invited to this enchanted event that will take place after-hours in the garden. Traditional Japanese dances will be performed by the Fujima Fujimine Dance Ensemble and music will be played on shakuhachi and koto by James Jennings, Marcia Takamura and Chigusa Kitai.

Evocative movement art will be performed by Kogut Butoh, and Haiku Northwest will host a poetry writing contest. Visitors can get a special look at the moon through telescopes provided by the Seattle Astronomical Society.

Three tea ceremonies, led by Tankokai, will be held in the Shoseian Teahouse in the garden. General admission tickets are $15. Admission with a tea ceremony is $25. Tickets must be purchased in advance.

The Japanese Garden gates will open at 6 p.m. for the event. The garden is located at 1075 Lake Washington Blvd. E. For more information, please visit www.seattlejapanesegarden.org/moonviewingfestival.html.

The Seattle Seahawks and the NFL announced today the route for the 2014 NFL KICKOFF RUN, set for Monday, September 1.

The course begins outside CenturyLink Field on Occidental Avenue South with runners travelling south on 1st Avenue until South Hanford Street. The course U-turns with runners travelling north on 1st Avenue until South Massachusetts Street where the course transitions to a route on the service road behind Safeco Field, adjacent to the railroad tracks. The course concludes with fans entering CenturyLink Field and running through the tunnel onto the field.

All race participants will receive a commemorative finisher medal and Seahawks race t-shirt. Registration fees are $50 for adults and $20 for youth, ages 4-12, through August 24.
Fans can register online at www.Seahawks5k.com.

The City of Bellevue will welcome Beijing’s popular Tech Hive by hosting its first-ever stop in the United States. The 48-hour event will feature 25 participants, 10 from China and 15 from the Puget Sound area, who will go from idea to demo of their product and present them to a panel of distinguished judges. Think “Shark Tank” comes to Bellevue.

Individuals interested in participating, or learning more about Tech Hive, are encouraged to visit the event website ww.bellevuetechhive.com.

Beijing Tech Hive is one of the longest running and best known startup competitions in China. Since 2010 more than 50 teams of entrepreneurs have participated in the events, with a several receiving funding from top venture capital funds such as Blue Run Ventures, China Broadband, GSR Ventures and others.

For more information go to www.bellevuetechhive.com.

Option For Washington Consumers Having Difficulty with Health Coverage

Any consumer experiencing payment issues with their health care coverage through Washington Healthplanfinder has the option to pay their health insurer directly.

Consumers who are currently experiencing payment problems may take the following steps:

If you’re having trouble using your coverage, contact the Insurance Commissioner’s Office at 1-800-562-6900.

Homeowners can learn how to reduce earthquake damage to their home when The Seattle Public Library hosts retrofit experts at two Library locations on the first Saturday of the month in September and October.

The workshops, presented by the Seattle Office of Emergency Management, are free and open to the public. Registration is required. To sign up, email snap@seattle.gov or call 206‐233‐5076. Free parking is available at the branches. Times and locations are listed below.

These introductory workshops provide information on how to seismically secure a house to its foundation, especially for houses built before 1980. Experienced home retrofit instructors will instruct attendees on what tools are needed to retrofit a house and discuss building techniques, the city’s free plan set and the permit process. The workshops are designed for all homeowners, whether they are doing the work themselves or hiring a qualified contractor.