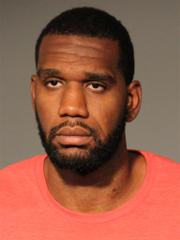 INDIANAPOLIS (AP) — Former No. 1 NBA draft pick Greg Oden has been arrested in Indianapolis on battery charges alleging that he punched a woman in the face.

Police in the suburban community of Lawrence say the 26-year-old was arrested early Thursday on two preliminary counts of misdemeanor battery and remains jailed.

A police report says officers called to a home found a woman on a sofa with a bloody face. Oden allegedly told officers "things got out of control" during an argument with his ex-girlfriend and he punched her in the face as others tried to hold him back.

The 7-foot Oden was a star at Lawrence North High School in Indianapolis and played a season at Ohio State before the Portland Trail Blazers made him the NBA's top 2007 draft pick.