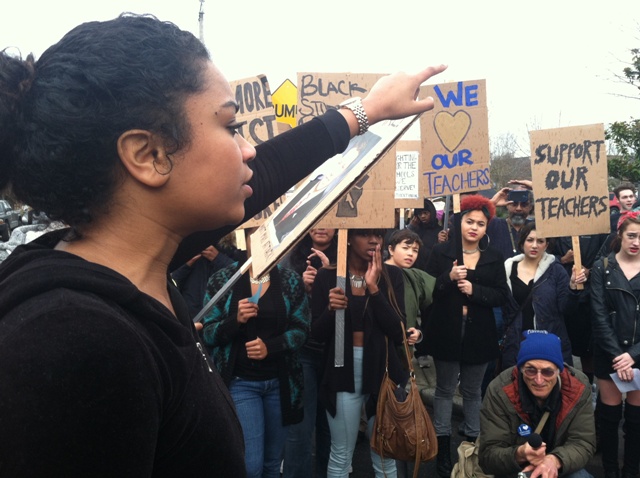 After years of middling success at beefing up its student population, Jefferson High School is posting major gains.

Statistics released by Portland Public Schools shows that Jeff’s enrollment is expected to climb by 50 this coming year, up to 561 from 413 in 2011-12.

“The target enrollment for Jeff as a focus, or non-comprehensive high school, is 450 to 600, so it’s nearly hit its high target,” says spokeswoman Erin Hoover Barnett. “Jefferson is becoming a go-to school.”

After decades of tinkering – and threatening to close the venerable institution outright – the district may have found the sweet spot between attracting more students and still serving Jefferson’s African American community base.

While community supports have slowly grown around the School of Champions – which celebrated its 100th anniversary in 2008 – the game-changer is certainly the partnership between Jefferson, PortlandCommunity College and an array of other colleges and universities around the state.

They earn high school credits as well as college credits that are fully transferrable to colleges statewide.

While former PCC President Algie Gatewood has often been credited as the key figure in creation of the MiddleCollege program, it was really former University of Oregon President Richard LaRiviere who shepherded the idea into being, before being fired by the state in 2011 for advocating autonomy for university finances.

LaRiviere traveled to Portland in 2009 to meet with community officials and float the college partnership idea; he and former State Sen. Margaret Carter met with The Skanner News editorial board to discuss ideas on how to diversify the UO’s student body and help inner city youth get a college education at the same time.

"Oregonians spend a lot of time talking about natural resources, and the importance of preservation," LaRiviere said during the MiddleCollege’s launch. "Our greatest natural resource is our young people and when we waste it, we're wasting our own futures, and it's a crime."

Today, students who maintain a 3.0 GPA, qualify for a federal Pell grant, and complete 45 credits – a year of classes – at PCC, get a full scholarship to the University of Oregon.

Barnett says the “reimagined Jefferson program,” hammered together by teachers, PCC  faculty, SEI staff, PPS and community members, has triggered an enrollment climb that started in the program’s first year.

She says student achievement has grown as well, with the percentage of students with the credits to stay on track for graduation by the end of ninth grade increasing from 55 percent in 2010-11 to 81 percent this year.

According to Barnett, another key component has been the increased marketing resources the district has brought to the Jefferson Cluster feeder schools, which include the merged campuses of Ockley Green and Chief Joseph.

She said the district’s hiring of community organizer Richard Gilliam has resulted in more promotional materials advertising improvements to the cluster, including International Baccalaureate programs at Vernon K-8 and King PK-8.

“Another exciting piece in drawing and retaining families in the Jefferson cluster schools is the launching this coming fall of a Mandarin dual language immersion program atKingPK-8School, Barnett says. “Ron Herndon, director of Albina Head Start and former chairman of the National Head Start board, was key in encouraging PPS to build on the Mandarin program he launched at the Head Start pre-school.”

Children living in the Jefferson area are automatically eligible to enroll there, but students from outside the area are subject to a lottery. Find out more by clicking here.