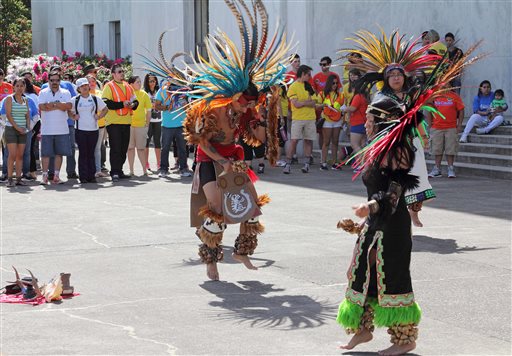 Titlakawan Aztec dancers perform on the steps of the Capitol, Thursday, May 1, 2014, in Salem, Ore. Hundreds of people rallied at the Oregon Capitol to support immigration reform, including allowing driving rights for people who can’t prove their legal residence, as part of May Day protests in Oregon and around the country. (AP Photo/Chad Garland)

SALEM, Ore. (AP) — Hundreds of people rallied on the steps of the Oregon Capitol on Thursday to support immigration reform, including allowing people who can't prove they are legal residents to drive.

The rally and a march through Salem were part of May Day protests in Oregon and around the nation. Protesters in Salem also carried signs opposing deportation and advocating equality.

"We represented a diversity of issues and a diversity of support for these issues," said Andrea Miller, executive director of Causa, an Oregon immigrant rights group and rally sponsor.

Union representatives, lawmakers and activists spoke on issues such as workers' rights, children's health care and the congressional stalemate on immigration reform.

Gov. John Kitzhaber last year signed a bill granting driving privileges, with some restrictions, to people who can't prove their legal residency. But critics collected enough signatures to qualify a measure opposing the move for the November ballot and the bill was placed on hold.

The law would grant four-year restricted licenses that can be used to drive but not to vote, board a plane, get government benefits or buy a firearm.

Opponents say the law rewards illegal actions and might encourage more people without legal documents to come to Oregon.

However, Jeff Stone, executive director of the Oregon Association of Nurseries, who spoke at the rally, said many agricultural businesses rely on immigrant workers who must drive to get to work. He said it's an issue about public safety, not immigration.

"Making sure all Oregonians — it doesn't matter what your immigrant status is — know the rules of the road, know how to drive and get insurance" is a fundamental thing, Stone said after the rally.

Nathalie Marquez, who carried a sign modeled after an Oregon driver's license, called driving a necessity for everybody and said the issue was the main reason she came to the rally.

The annual event has in past years led to clashes between protesters and police. There did not appear to be any problems Thursday, aside from slowing the rush-hour commute on a day of record-breaking heat.