Hundreds March in Seattle for May Day Protest 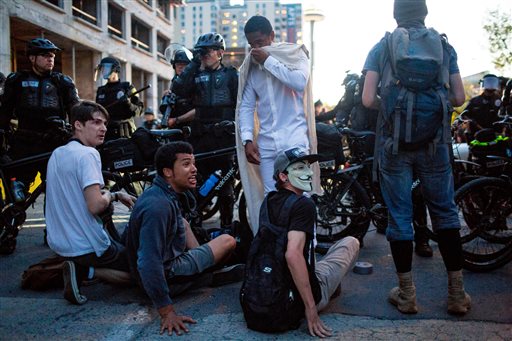 A group of young men attempt to persuade other protesters to sit in front of the police line during a May Day anti-capitalist march Thursday, May 1, 2014, in Seattle, Wash. (AP Photo/seattlepi.com, Jordan Stead

SEATTLE (AP) -- Hundreds of peaceful demonstrators marched in Seattle on May Day for immigrant rights and a minimum wage increase, but a smaller group of sometimes-masked protesters kept police busy as the sun went down.

Police said they arrested 10 people during the evening protest.

Officers said they used pepper spray after some of the Thursday night marchers threw bottles at police in downtown Seattle. Protesters later started trash can fires in the Capitol Hill neighborhood. One arrest came after a brick was hurled at police.

The anti-capitalist protesters had no permit but police accompanied them as they marched in a rambling circuit from Capitol Hill to downtown Seattle and back again before officers hemmed them in. Some tossed firecrackers at police, officers said.

Seattle police were out in force on bicycles, foot and horseback, supplementing their numbers with officers from several other jurisdictions.

Violence has plagued May Day in Seattle during the past two years, with protesters challenging police in the streets and sometimes stealing the thunder of much larger daytime events. Last year, police arrested 18 people from a crowd that pelted them with rocks and bottles.

This year, while a few scuffles were reported and several cars were vandalized, no serious damage was reported.

Seattle police noted a marked uptick in anti-authority rhetoric leading up to this year's May Day events, said Capt. Chris Fowler, in charge of the department's response to the demonstrations.

Police escorted all groups that wanted to march, allowing them to block traffic but prepared to step in to stop property damage.

Businesses downtown also prepared, posting security guards outside, taping paper over their windows to discourage graffiti, and using metal coat hangers to tie down iron grates along the sidewalks.

The earlier boisterous May Day rally started in south Seattle and headed to Westlake Park downtown, with demonstrators waving red signs seeking an end to deportations and "poverty wages" and calling for a $15-an-hour minimum wage.

Fowler told The Seattle Times that planners had expected nearly 700 people for the afternoon May Day march. He estimated the crowd size at closer to 400.

Earlier Thursday, Mayor Ed Murray announced a plan to phase in a $15 minimum wage in the city over the next seven years.

Daniel  Stender, 26, was at the rally holding a sign pushing for quicker action on getting to a $15 minimum wage.

"It's getting ridiculous. It's getting to the point where you can't afford things," he said.

The police department's blog said vandals spray-painted a few businesses early Thursday in the Capitol Hill neighborhood -- a car dealership, bank, restaurant and "the neighborhood headquarters of the oppressive regime at the United States Postal Service."

Officers also found "Kill SPD" painted on the bank, and a flier was circulated calling for killing officers.