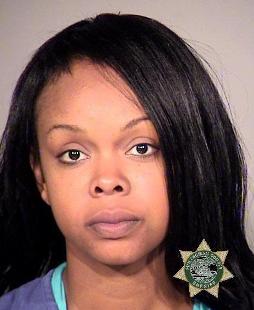 Police arrest Naomi Etta Perkins, 30, was  arrested and charged with assault after an Easter Sunday church service, according to a press release from Portland Police Bureau.

Officers were called out to Oliver Elementary School, 15840 SE Taylor Street, to respond to reports of a fight between two women, which left one with cuts from a razor blade. Life Restoration Church holds its church services at the school.

Perkins and the victim, 32-year-old Anjeanette Marie Brown, reportedly had fought over a man they both knew.  During the altercation, Brown sustained a serious, but not life-threatening, cut to one of her arms.

“Officers learned that Perkins and Brown, known to each other, had a dispute after church over a man known to both of them and that Perkins used a razor blade to cut one of Brown's braids off of her head,” the police release says. “As the two struggled, Perkins cut Brown on one of her arms, causing a significant injury.”

Officers arrested Perkins, charged her with Assault in the third degree and took her to Multnmah County Jail. Brown was treated for her injury at a Portland hospital.

Detectives ask anyone who witnessed the incident or has information to contact Detective Jeff Sharp at (503) 823-9773 or jeff.sharp@portlandoregon.gov.