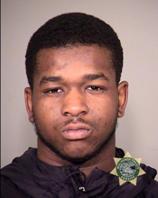 Simmons was taken into custody after the police bureau's Special Emergency Reaction Team entered a home on the 2600 block of North Willis Blvd. early Wednesday.

A second search warrant was served at a residence in the 17300 block of Northeast Halsey Street by the Gresham Police Department Special Weapons and Tactics team.

Police say they found a handgun at the home on North Willis Blvd.

Simmons is accused of shooting in the street around 5 p.m. Dec. 26, 2013, in the vicinity of Northeast 6th Ave. and Simpson Street.

Simmons was charged with Attempted Murder, Attempted Assault in the First Degree, Unlawful Use of a Weapon, and Unlawful Possession of a Firearm. He was booked into the Multnomah County Jail and will be arraigned on Thursday.

Anyone with additional information about this case is asked to contact Detective Meghan Burkeen at (503) 823-2092 or meghan.burkeen@portlandoregon.gov.