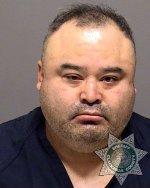 The shooting took place after Homero Reynaga and his partner Carlos Pagan pursued shoplifting suspect Randolph Marion Martin. Martin drove off, and reportedly tried to run over Pagan and Reynaga. They fired. He was wounded in the hand. Martin’s car was eventually stopped by spike strips.  The Oregonian has reported that Reynaga has been on probation for driving drunk in 2012.

Now a 15-year-veteran officer, Reynaga was off duty Dec. 31, when he was arrested by the Tualatin Police Department, responding to a report that a man was vandalizing a neighbor’s vehicle in the 6400 block of Southwest Nyberg Lane.

Reynaga was booked into the Clackamas County Jail and charged with Criminal Mischief in the second degree.  Currently he is on paid administrative leave pending an internal investigation.