Before gentrification, before Northeast redlining, and before Vanport – there was the Golden West Hotel. Sitting in the shadow of Union Station, where a large number of African Americans found gainful employment, the Golden West was a community gathering place for pool games, drinks, meals, haircuts and even a Turkish bath. The early part of the 20th century was kind to the grand hotel and the surrounding Black-owned businesses – the Depression was not.
In the late '80s, a group of concerned citizens formed the Friends of Golden West group. After organizing and building a historical display in the hotel, now owned by the Central City Concern, the group dissolved.
And that's where Will Bennett has stepped in to pick up the pieces.
"I don't know what happened to the group," Bennett said. "But for 18 years, no one was caring for it."
Bennett is a local amateur historian who has been leading a one-man effort to establish an African American Historical District, a restoration of the Golden West Display, and truthful history about race relations in Oregon.
About two years ago, Bennett took it up as a personal project to push the Central City Concern to clean up the Golden West Display. He was instrumental in helping arrange a $9,250 grant through the city's Vision into Action program to restore the sun and water-damaged display with help from the Old Town History Project. But it's only a beginning, he says.
"Friends of the Golden West wanted a museum, a historical district and a national registry of buildings needs to be established," he said. "All of these things are required to have a vibrant community. We're not quite a community like we used to be."
In many ways, Bennett is a restoration project all his own. He's not shy about talking about his past, it helped to make him who he is today. He was raised in the state foster care system. Kathryn Bogle — the daughter of Waldo Bogle, the barber at the original Golden West, and mother to former City Commissioner Dick Bogle — was his case worker, and she still remembered him when he called her decades later for help restoring the Golden West display. His case sent ripples through the state foster system after a caregiver physically abused him – giving him scars he still carries to this day.
Bennett has battle drug addiction and homelessness. He's also had 11 felony convictions, mostly for drug-related crimes. But he's cleaned up his life and turned it around.
"I had to do this for her (Kathryn Bogle)," he said.
Bennett's new addiction is local African American history. It all began when he made a call to Portland Public Schools to demand a change in curriculum when it came to teaching the truth about the way African Americans had been treated. They gave him a speaking slot. He was terrified about what he was going to say. So he started looking for a copy of Oregon Public Broadcasting's "Local Color" to play.
"After 18 years you couldn't find a copy nowhere," he said "I like to tell people I got ethnic with them."
He found a copy in the office of Portland State University's Darryl Milner, who assisted journalist John Tuttle in making the award-winning film. Through Bennett's continued prodding, OPB re-released the 1991 film on DVD and distributed hundreds of free copies to schools nad nonprofit organizations.
"I'm a catalyst, some of these things are already in place, I just speed 'em up a little bit," he said.
Because of his efforts, the city of Portland's Black History Committee gave him an award during their Black History celebration earlier this month.
"I'm humble and grateful," he says. 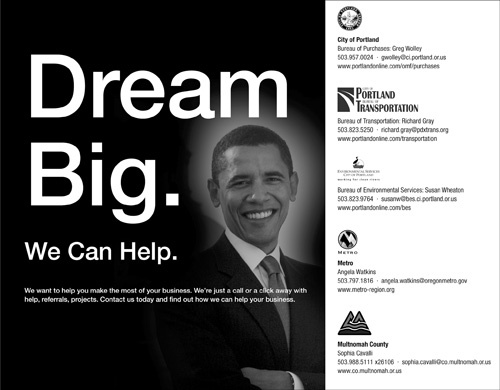 Always looking ahead, Bennett is organizing public screenings for "Local Color," and hopes to push someone to make a sequel to the film. He'd also like to see an African American museum open up, establish a historical district and hopefully partner with an organization such as the Urban League to promote historical understanding.
But wherever his vision takes him, he doesn't want it to be about the money.
"I don't want to be market driven," he says. "I'm not into all that formality."
And like the many forgotten faces that once graced the halls of the Golden West, the behind-the-scenes Bennett wants people to learn about the Black people who helped make this city thrive.
"I want to focus on the unsung hero," he said.