FROM THE ARCHIVES Part 1: Community Sorts Through Confrontation Fallout 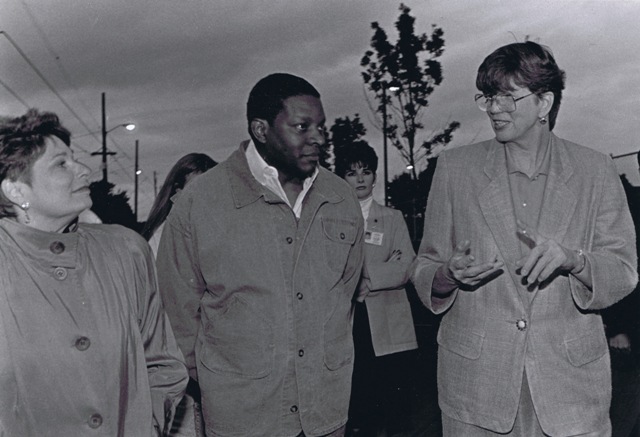 By Tonya Y. Parker Of The Skanner News
Published: 22 August 2014

Community meetings and frank discussions held during the past week slowly are beginning to mend the rift that grew recently between Portland police, young adults and residents.

Talk now has turned to the future, lessons learned and new partnerships instead of the canceled party Aug. 16 and demonstration about police harassment Aug. 17 in Northeast Portland that caused so much discord. Most recently, the Northeast Coalition of Neighborhoods Inc. sponsored a press conference/public meeting Aug. 20 in the courtyard between King Elementary School and the King Neighborhood Facility, where the neighborhood organization is located.

About 65 people attended the morning event - including everyone from ministers to mothers, police to politicians, community leaders to community residents, Mayor Vera Katz, City Commissioner Jim Francesconi and Police Chief Charles Moose also sat in the audience. By the end of the meeting, most agreed communication between all factions is key and needs improving.

"There's a lot of misperceptions going on out there," moderator Charles Ford said. "The bottom line of all of this is miscommunication."

Ora Hart - who lives within walking distance of Irving Park, where partygoers headed after being turned away from Sellwood Park - said her main issue is people who classify any event where a number of young Black people are gathered as gang-related. She called Daniel Binns, organizer of the annual summer outdoor party, an entrepreneur who isn't being allowed room to change because of his criminal past.

"Our young people see themselves losing a community," Hart said. "It's very unfair and very unfortunate that this thing had to happen."

Binns said he didn't realize so many were willing to help him give back to the community by sponsoring free events for youth. He said he wanted more people in the community to take time to help their neighbors.

Still others said people need to know the proper steps to take to sponsor such a large event. Community organizations and groups are willing to help them do so.

Kendra Smith Rosser, who attended the community meeting, is one such person who wants some answers. She said police pepper-sprayed her and her 1-year-old son, Kevin, after getting into a confrontation about her passing through blocked streets leading to her apartment building on Martin Luther King Jr. Boulevard.

Rosser said she'd been grocery shopping that evening and happened upon the protest. She said that an officer called her an idiot for using her baby as a shield, and that the officer told her she hoped she never got her child back.

Rosser has her son but must talk with state child protection officials about custody and appear in court in September on charges of reckless endangerment and interfering in an emergency. After breaking into tears retelling the story, she was helped to a seat at a microphone next to Northeast Precinct Cmdr. Derrick Foxworth.

Rosser then turned to him and with a tear-streaked face asked, "Why were me and my baby sprayed with Mace?" After several quiet seconds, Foxworth said he didn't have an answer but would look into the matter.

The Rev. Robin Wisner - a neighbor of Moose, whose Going Street house was the focal point of the melee - read a two-page letter he wrote to Katz and the police chief soon after the demonstration. He said officers shot bean bags at two bystanders who were trying to figure out what was happening, and pointed a rifle at him.

"I have always been taught to believe that the police bureau is active to protect and to serve the public," he read, taking a deep breath. "However, through the actions that have taken place the night of Aug. 17 by the Portland police officer, I have come to re-evaluate what I perceive to be important."