FROM THE ARCHIVES Part 2: Unlawful Arrest Claim Filed Against City 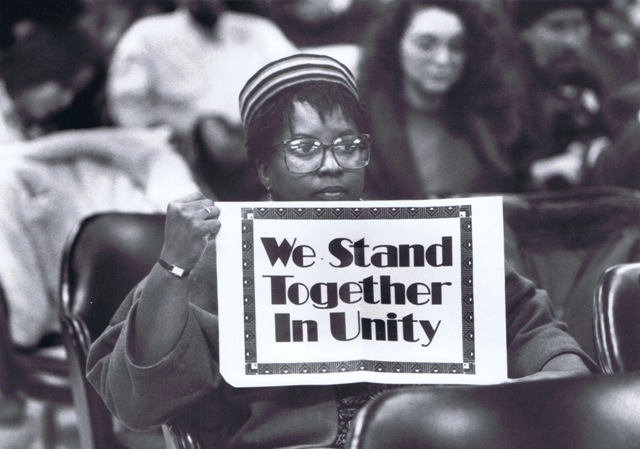 Will Emerson Of The Skanner News
Published: 22 August 2014

An array of groups stepped up in the late 90s to protest police shootings, including Mothers Against Police Harassment. Julie Keefe photo

For Kendra Smith Rosser, the events leading to her arrest one chaotic night last August haunt her today.

She said she has had nightmares, continues to seek medical treatment for an injured arm and still feels humiliated because police publicly arrested and Maced her during a protest stemming from a canceled beach party. Rosser also has had to endure juvenile court proceedings to get back her infant son, who temporarily was taken from her after the incident, as well as continued criminal proceedings.

She is charged with resisting arrest, disorderly conduct and second-degree trespass. A pretrial hearing is set for March 5 and a trial for March 15.

Because of what Rosser said she has suffered, her attorney recently filed a claim against the city of Portland on her behalf seeking damages for unlawful arrest and detention. Part of the notice to the city's Risk Management office dated Feb. 12 reads: "Officers of the Portland Police Bureau arrested Ms. Rosser, apparently for no particularly good reason, other than the fact she was an African American woman within arm's reach."

No damage amount for the claim has been decided, said Rosser's attorney, Michael Rose of Steenson, Schumann, Tewksbury, Later & Rose, adding she would like to settle out of court. If not, he will advise her to file a lawsuit if necessary.

"Actually, the issue is not the money," Rose said. "The issue is the outrage and the humiliation.

"(The city) has acknowledged receipt of our claim, and they're going to look into it. (But) they haven't given any substantive answers."

Police spokesperson Detective Sgt. Cheryl Kanzler said that the bureau is aware of the notice but that she can't comment on it. "It's everyone's right to pursue litigation as they see fit, so we'll just sit back and see what happens."

Rosser, 29, said she'd like to be reimbursed for her medical bills. She also wants be compensated for her pain and suffering, stress and embarrassment.

"It has changed my life totally," Rosser said. "The trauma that it has brought upon my family, the stress, the humiliation."

But "the money is not a factor," she said. "I also want to make the statement that no one else should go through this."

Rosser was driving home Aug. 17 to the McCoy Village Apartments near where demonstrators were outside Police Chief Charles Moose's house protesting their treatment by officers the day before, when they were turned away from a popular party a Northeast Portland man sponsors annually at an Oaks Park beach. Officials said a permit was not granted because of past problems at the event and because too many people were expected.

Rosser said she'd been grocery shopping the night of the protest and had her young child with her in the car. She said she did not know anything about the demonstration.

Upon arriving at her department complex, Rosser said the streets near the building were blocked. After making numerous attempts to enter from different sides, she saw someone she knew and stopped to talk with her.

From a distance, they watched the clash between the police and protesters, Rosser said. Then, as police famed out in the neighborhood to disperse the crowd, she said she somehow got caught up in the commotion, was Maced and eventually was arrested.

"I was just standing there, and then they bombarded me," Rosser recalled. "When I got Maced, my son was in my arms. It was pretty much shock and disbelief that this was going on in 1998."