FROM THE ARCHIVES Part 3: Protest Bystander Feels Vindicated: Kendra Smith Rosser is Innocent of All Charges 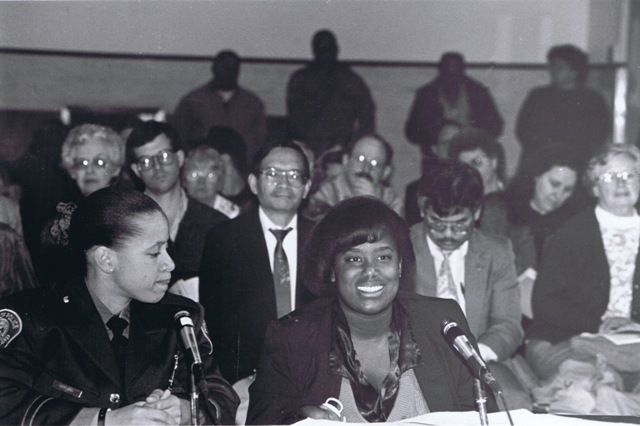 Kendra Smith Rosser says she has a message for all people of color: Racial injustice is alive and well, and the struggle for civil rights continues.

The 30-year-old was the subject of much media attention after a 1998 protest held near then-Portland Police Chief Charles Moose's Northeast home. During the night of Aug. 17, she said the police abused her and arrested her falsely.

In addition, Rosser was charged with resisting arrest, criminal trespassing and interfering in an emergency. The disorderly conduct charge levied against her was dropped after being deemed unconstitutional.

Since that time, Rosser said she has undergone a great deal of emotional and physical pain. Yet she is pleased with the outcome of the city's case against her.

After waiting more than a year for it to go to trial, Rosser said she was vindicated Jan. 5 when she was found innocent of all the charges. The jury took less than two hours to reach the not-guilty verdict.

Rosser said she was a bit surprised by the makeup of the jury. She expected a jury of her peers.

Out of the scores of potential jury members, Rosser noted her attorney at the time, Alan Karpinski, said a few were Black and in her age group; however, all of the chosen jury members were White, and only a couple were in her age group. He said the fact the events were recorded on videotape did much to sway the jury in favor of his client.

"I think it was a just verdict in (Rosser's) case," Karpinski said. "She didn't do a heck of a lot wrong, and (the police) tried to make more out of it than it was."

Although the trial's positive outcome has given Rosser a moment to catch her breath, on the night of Aug. 17, 1998, pandemonium ruled at Martin Luther King Jr. Boulevard and Going Street. "After a while, a lot of police officers came out of nowhere.

"People couldn't believe the way things had escalated. I thought that in 1998 we had gotten past this, especially on MLK Boulevard."

According to Rosser, much of what took place that night could have been prevented if not for overzealous law enforcement officials – police officers she described as having "attacked" the crowd. The seeds of the melee were planted Aug. 16, the day Northeast Portland resident Daniel Binns celebrates his birthday.

However, the party was a no-go as a result of the city's decision not to issue a permit. Police officials said they thought the event, which in the past had drawn about 2,000 people, would present too much opportunity for trouble.

Individuals who said they were denied the opportunity to gather peacefully staged an impromptu protest at Moose's house, but it soon got out of hand.

Rosser found herself in the midst of the confusion as she arrived home from the grocery store with her young child.

"I wasn't a part of it, but they tried to make me a part of it," she said. "I knew nothing about the incident. I was an innocent bystander."

Rosser described a scene in which she was denied access to her home with her child and perishable groceries in tow. She killed time by going to a friend's house and chatting for a while but soon became restless and wanted to enter her home.

But the scene at Martin Luther King Jr. Boulevard and Going Street escalated just as Rosser was attempting to return to her house. When police armed with billy clubs, shields and beanbag guns ordered the crowd to disperse, she was caught in the middle between officers and fleeing members of the crowd.

With her 1-year-old son in her arms, Rosser said she was accosted. Her son was ripped from her arms as both their faces were pepper sprayed.

"It was like reliving the '60s," Rosser said. "It was pretty much a shock when they (the police) came with billy clubs and the riot gear."

Rosser noted that even during the confusion, it was good to see Blacks united for a cause.

Before the night ended, she allegedly was manhandled, verbally assaulted and placed in a jail cell. Rosser said that the scuffle exacerbated her arthritis and that the handcuffs placed on her left permanent scars. She still suffers from nightmares.

"People need to know what's going on in this community," Rosser said. "I went through a battle.

"I knew I had been treated wrong, and I hadn't done anything. No one should have to go through what I went through."

Rosser said her troubles might result in a lawsuit against the city of Portland. She is seeking the services of an attorney.

Future plans for Rosser include the pursuit of a career as a gospel recording artist. She signed with local record label Praise Gospel Music last month and began in-studio work this week.

Rosser's recent experiences also have given her a taste for activism. "I just want people to know that justice still prevails, and there is still hope."