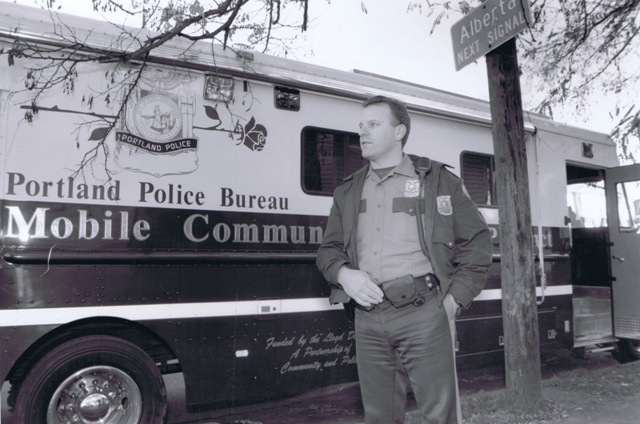 Rosser's case harks back to a defining moment in Portland community policing: the law enforcement crackdown on Daniel Binns' annual birthday party during the summer of 1998 and the riot it produced at former Police Chief Charles Moose's Northeast Portland home on Aug. 17 of that year.

Binns, a local business owner who'd had trouble with the law in the past, was famous throughout the Black community for holding giant birthday parties attended by thousands of drinking celebrants.

With a history of citizen complaints against Binns' events - for everything from a lack of street parking to violent crimes - police officers in 1998 moved to deny him a license for the get-togethers.

On Sunday, Aug. 17, an estimated 200 African Americans marched down Martin Luther King Jr. Boulevard in support of what they felt was an unfair crackdown on Binns. Their plan was to march on the Northeast Precinct and file a citizen complaint of police misconduct with the internal affairs division.

When the crowd arrived at the precinct, officers had closed and locked down the facility.

The enraged crowd - now swollen by even more participants - turned south and marched on Police Chief Moose's nearby home.

Moose had moved to the neighborhood as part of a widely publicized effort to strengthen community policing by encouraging officers to actually live in the areas where they worked.

When word came the crowd was headed his way, Moose hunkered down and pretended not to be home while riot police were called to surround his block and protect his safety.

As it happens, Moose lived in the 4900 block of Northeast Grand Avenue - right around the corner from Rosser.

A telephone book-sized report generated in the following months details all the weekend's events, including police communications, arrest records, media reports and even transcripts of emergency dispatch calls for medical assistance.

The report shows a bomb threat had been called into the Northeast precinct, and gunshots had been heard earlier in the surrounding neighborhood.

Rosser lived in the Gladys McCoy Village apartment complex, which was ringed by riot police erratically turning some people away and allowing some inside on the night she was arrested.

Rosser claims - and the video corroborates - that police blocked the entrance to her building immediately after then-Cmdr. Derrick Foxworth, now an assistant chief, ordered rioters to "go to your own homes."

One man was shot, and six were arrested.

The KATU news video shows young teens moving toward the McCoy Village entrance as a line of police motion them away, shouting, "Not now!" An unidentified voice shouts in the background, "They live there, you mothers!"

The giant report on the whole weekend of police and community confrontations revealed that at least one other unidentified mother in the neighborhood had her landlord call 9-1-1 because she and her child also had pepper sprayed in their faces.

The emergency dispatchers suggested she rinse her own and her child's face with water.

Moose made headlines the following week by holding a press conference denouncing the entire Northeast Portland community. He took a job in Maryland within the year.