By Helen Silvis of The Skanner News
Published: 16 February 2012

Portland's move to every other week garbage pickup remains controversial. Critics say the city hasn't answered their concerns over health and safety, feathered and furry scavengers, and how we'll cope with soiled diapers and pet poop simmering for an extra week in the July sun.

So, this spring, the city's waste experts are sending an army of 500 volunteers and master recyclers into neighborhoods to visit 40,000 households – and help solve any stubborn garbage problems. But will they be able to prevent a summer of discontent?

Take Dee L. Baker, who moved to East County because she wanted to live in a green and tree-filled neighborhood. She'd like it to stay that way, she says.

"I love coming home and smelling the fresh air," she says. "I love the green. I love the clean air. Now they've taken the garbage out of the dump and they've landed it in our community. People are not prepared for this. They should have given us a choice."

Baker, who is President of the Oregon Society of Tax Consultants, works from home. Her family consists of three adults and two children. After hosting guests for Thanksgiving, Baker said she was drowning in uncollected garbage. What's more, despite having a large, 60-gallon bin she couldn't ever seem to get it all picked up. Her garbage collectors kept leaving bags by the road because her bin was over the weight limit. Then the holiday season brought extra packaging that could not be recycled.
Baker got mad. So mad, that she fired off an email to 3,000 of her closest friends, urging them to take their rotting garbage to City Hall. Return emails supported her call to action. Nevertheless, she quickly retracted, afraid someone might actually act on her advice and she would be held responsible. But that doesn't mean she's changed her mind about the policy.

"It's ridiculous,' she says. "Back in the day, they would come to your house, get your garbage and take it away. Now they want us to recycle and separate it. And that food thing is adding insult to injury. I'm already paying for a bigger can. We should be getting a break on our bill if you want us to do all the work."
Frustrated with the bags of garbage piling up, she called the city's hotline.

"I called and they told me – Take the other stuff to the dump! Are you serious?"

And since composting started, she says, a lot more gulls are visible in her neighborhood. She fears other scavengers will follow.

"What is going to happen when it gets warm?" Baker asks. "It's cold right now, but just wait until summer comes. We're going to have maggots, flies, rats...What are they trying to do—start a pandemic?"

Lakecia Banks and her mother Danetta own Smiling Faces, an in-home daycare on N.E. Killingsworth Street. Banks says they were in favor of the move to two-week garbage pickup, which they hope will be good for the environment. However, they are concerned about odor and pests.

"It has been a real problem," Banks says. "We're having dirty diapers sit around for two weeks, which attracts everything and the smell is horrendous."

To try to reduce the smell they moved the garbage bin farther from the house. It means extra work, yet still doesn't solve the problem. Is Banks worried about summer?

"Yes! Yes! Yes!" she says. "It would be nice if they came up with special rules for daycares and schools, and if they would take our diapers away every week."

Jodie Throckmorton, who also runs a home daycare, in Southeast Portland, says all but one of her parents uses disposable diapers. That means overflowing garbage, she says. For the moment, neighbors are allowing her to put some garbage in their can. She doesn't put the diapers in her neighbors bin, she says, just cleaner garbage.

Lauren Norris, sustainable living outreach manager for the Portland's Bureau of Planning and Sustainability, said just 20 percent of calls to the composting hotline, have been complaints. The other 80 percent, were simply questions about how make the new system work. The number of calls did increase, as expected, she says, but they don't have the full data yet. "It's still very early, and a lot of the information we gather is on a quarterly basis."

Norris says the city is reaching out to help people solve problems. Already, representatives have visited 74 community events and reached 5,000 people. And this spring 500 volunteers and master recyclers are planning a massive outreach, with the goal of reaching 40,000 people.

The volunteers will be trained to help people solve garbage problems, and they will be paid $2 for everyone they contact in person and 50 cents for leaving a door hanger. To volunteer call 503-823-7202 or email [email protected]

"Portlanders are recyclers," Norris says. "Ninety-five percent of Portlanders recycle and it's a core part of who they are. So most people are taking this on, like they did with recycling. People are trying to make it work. A small percentage of people are upset."

Norris says disposable diapers were a concern for her team, but the pilot project that tested the plan in four neighborhoods across the city, didn't find problems.

"Disposable diapers: that was one of the things we most feared," she said. "Generally speaking, people were not as concerned about it as we thought they would be. It is a tougher situation and they may need to get a larger bin.

"It's important to keep the lid closed and you might have to move your bin farther from your house – maybe to the far side of your garage. In the summer, keeping the bin in a shady place will help reduce the smell."

Yet just look on any street on garbage pickup day and it's clear that some bins routinely are overflowing. And what about people who don't have a good shady spot.

Norris said the city has asked haulers to be open to one-time garbage pickups, when customers request them.  You can leave an extra bag out on your regular day for $5. Or like Baker, you might decide to upsize to a larger garbage can.

How many people have done this? Norris says the data hasn't yet been gathered, but about 7 percent of people in the pilot did need larger garbage cans. She added that other people have been able downsize their cans, or reduce their service to once a month. 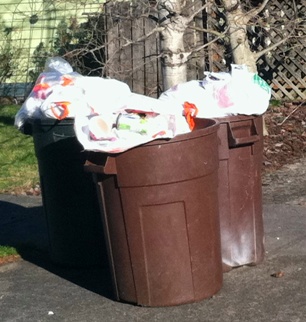 Jackie Lang of Waste Management, one of the 19 haulers who pick up Portland's waste, said from 5 percent to 7 percent of her customers have increased their can size.

Low-income families with excess medical waste can get help to upsize their garbage can for no extra cost. Call 503-823-7202 and ask to apply.

Baker wonders if someone is making a profit from her problem. And she's not alone in that. Comments on articles about composting usually feature someone who believes haulers are making big bucks from the change to a two-weekly garbage collection schedule.

Lang says that's a myth. The changes haven't saved money for haulers. The trucks are making the same number of trips because they are picking up compost and yard waste every week now, she says.


View Where Does Our Garbage Go? in a larger map
"The food and the yard debris still have- to go to the transfer station every week. It's changed our routes a lot, but there are no cost savings for the hauler."

On comment threads some posters say they are so angry that they dispose of trash in the recycling or the compost, hidden in a brown paper bag. But Lang says she has not seen an increase in problems.

"There are always contamination issues," she says. "It's important. But to think everyone is going to get everything in the right bin every time: That's not realistic.

"On the whole people say it is getting easier and easier. Changing behaviors always takes time and education. But what we're hearing is that it's getting easier. People want to do the right thing."