No Consumer Protections in Homeowner Associations 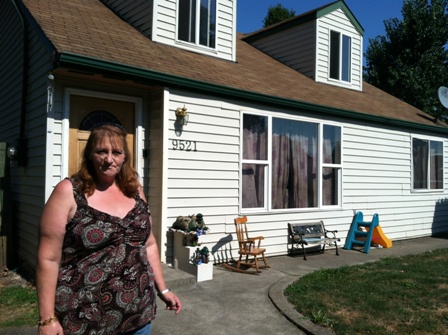 Say the words “homeowners’ association” and eyes tend to roll. The steady stream of news about the privatized neighborhoods, run by resident boards of homeowners, ranges from mafia takeovers to DNA tests on dog poop. In our two-year look into homeowner associations and their affiliated businesses, The Skanner News heard many stories about simple disputes that led to eye-popping legal costs; some residents have even lost their homes -- Denise Kraft, above, is on the verge of losing everything she owns. Because the industry is “self-regulating,” many of these homeowners have nowhere to turn for consumer protection.

When Denise Kraft bought her home in Northeast Portland – only to move in and discover she had no running water -- it seemed simple enough to call the homeowner association management company and have them send a plumber.

After all, the water was running right into the street, and since all the residents of her HOA were connected to just one broken and aging water main, everyone would end up paying for the leak until it was fixed.

The low income single mother recently lost a lawsuit brought by her HOA over the debt from that disputed $1,300 plumbing bill, which led to about $4,000 in unpaid assessments -- monthly fees residents pay their HOA for maintenance and expenses.

Kraft also has to cover the HOA’s attorney costs – bringing her total to almost $20,000, on the house she paid $30,000 in cash for in 2009. She will be charged 9 percent interest on that debt for every year it takes to pay it off.

How many other Northwest home and condo owners have lost all their property through HOAs? It’s impossible to know, because unless states act to tighten up their laws, the homeowner- and condominium owner associations don’t have to report that to anyone. In fact, the Freedom of Information Act doesn’t apply here at all, nor does the U.S. Constitution.

Kraft, like HOA residents around Oregon, Washington and many other states, is being nickel-and-dimed out of her property, while elected officials and government bureaus turn a blind eye to basic consumer complaints.

"I have gone my whole life without a home, and this was going to be the best thing that ever happened to me and my family,” Kraft says of her little house in Snoozy's Hollow.

"I put everything I had into this house, and now I'm going to lose everything."

From Wacky to Tragic

Homeowner associations are a form of private government. They involve local governing boards set up by developers, with official approval from the local municipality, to run their communities based on “CC&R’s,” which are “covenants, conditions and restrictions,” contracts homeowners must sign to live there.

Although the roots of rule-enforced communities are ancient around the world, HOAs really started popping up in larger numbers in the United States back in the mid-1960s, with the advent of planned housing subdivisions, especially condominiums.

The heart of any homeowner association is its board of directors, which is an all-volunteer panel elected by the homeowners to run the community based on the rules contained in the contracts they signed as a condition of property ownership.

The point of such rules and governing boards, in theory at least, is to protect the equity of homeowners and make sure the community’s property is well-kept in the estimated 350,000 such developments nationwide.

It sounds simple enough -- and it is for sure that many HOA boards are well-run and appreciated for their efforts. But all over the country, these boards have made headlines over controversies, both wacky and tragic.

In March of last year a scandal erupted in Florida over a board that voted to ban skateboards, roller blades, bicycles, scooters, toys and ball playing inside the gates of its condo development.

More recently, the Sanford, Fla., homeowner association governing the condo development where Trayvon Martin was killed by George Zimmerman settled with Martin’s parents for $1 million in a sealed judgment.

Observers there say the incident has made some associations re-examine their neighborhood watch programs.