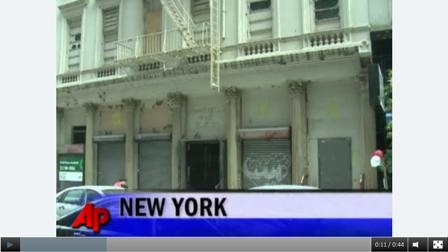 NEW YORK — Donald Trump offered Thursday to buy out a major investor in the real estate partnership that controls the site near ground zero where a Muslim group wants to build a 13-story Islamic center and mosque.
The offer, though, fell flat nearly instantly.
"This is just a cheap attempt to get publicity and get in the limelight," said Wolodymyr Starosolsky, a lawyer for the investor, Hisham Elzanaty.
The Skanner News Video here
In a letter released Thursday by Trump's publicist, the real estate investor told Elzanaty that he would buy his stake in the lower Manhattan building for 25 percent more than whatever he paid.
"I am making this offer as a resident of New York and citizen of the United States, not because I think the location is a spectacular one (because it is not), but because it will end a very serious, inflammatory, and highly divisive situation that is destined, in my opinion, to only get worse," the letter said.
Trump also attached a condition to his offer: He said that as part of the deal, the backers of the mosque project would need to promise that any new mosque they constructed would be at least five blocks farther away from the World Trade Center site.
In Gainesville, Fla., a minister said he had canceled plans to burn copies of the Quran because the imam leading the mosque agreed to move its location. Imam Feisal Abdul Rauf said that he was surprised by the announcement and that he would not barter.
The current planned location is just two blocks north of the site. Opponents argue it's insensitive to families and memories of Sept. 11 victims to build a mosque so close to where Islamic extremists flew planes into the World Trade Center and killed nearly 2,800 people, while proponents support the project as a reflection of religious freedom and diversity.
It's unclear how much control Elzanaty has over the property, which is owned by an eight-member investment group led by Soho Properties, but his response was unequivocal.
"He knows what the value of the building is. If he were really interested in buying the buiding, he would have come forward with at least $20 million," Starosolsky said.
Elzanaty said he remains committed to the idea of having a mosque built on at least part of the property.
A spokesman for Soho Properties general manager Sharif El-Gamal and his nonprofit group, Park51, did not immediately respond to a request for comment Thursday. Earlier in the day, the organization sent a statement to The Associated Press affirming that Soho Properties controlled the real estate and that Elzanaty was one of several investors.
El-Gamal and other people associated with the Islamic center have refused to detail the ownership structure of the real estate partnership that holds the site.
Elzanaty's lawyer did not immediately return a phone message Thursday. But in a pair of interviews with the AP this week, Elzanaty said he had invested in the site with an intention of making a profit and was willing to half the land for private development, and maybe all of it if a Muslim group doesn't come forward with enough money to build the mosque.