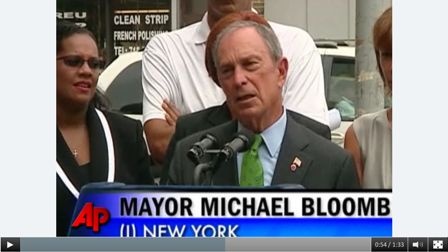 WASHINGTON – Add another election-year hurdle for Democrats: President Barack Obama's forceful defense of the right of Muslims to build a mosque near the World Trade Center site.
His comments are giving Republicans a campaign-year cudgel and forcing Democrats to address a divisive issue within weeks of midterm contests that will decide the balance of power in Washington. Senate Majority Leader Harry Reid, in a competitive re-election fight, was the highest profile Democrat to move away from Obama on the matter.

"The First Amendment protects freedom of religion," Reid's spokesman Jim Manley said in a statement Monday. "Senator Reid respects that but thinks that the mosque should be built some place else."
Democrats privately called the issue a distraction when the party should be laser-focused on keeping comfortable majorities in Congress. The political climate already favors Republicans as economically struggling voters look to unleash their fury on the party in power.
White House aides have spent four days trying to explain exactly where the normally eloquent president stands on the mosque. Obama's ringing statement in support of religious equality Friday, followed a day later by a caveat, stoked anew false Internet rumors about his citizenship and religion.
Some Democratic candidates fear the political fallout that Republicans suggest is coming against those who support building a mosque two blocks from the lower Manhattan site of the Sept. 11, 2001, attacks. And some Republicans are trying to walk a careful line in their criticism, lest they be tagged religiously intolerant or be accused of stoking fear.
Former Sen. Dan Coats, who is challenging Rep. Brad Ellsworth for an Indiana Senate seat, said: "It's an insult I think to the people who lost lives there."
Former state Rep. Kevin Calvey, a Republican running for Congress in Oklahoma who served in Iraq, said ground zero is a "grossly inappropriate" place for a mosque. "I think it sends a message to terrorists that they've won, and I think that's a mistake," he said.
One of the few to praise the president was Republican-turned-independent Michael Bloomberg, the mayor of New York.
"If we shut down — shout down — a mosque and community center because it is two blocks away from the site where freedom was attacked, I think it would be a sad day for America," Bloomberg told reporters Monday.
For weeks, the White House had refused to interject itself into what it called a local zoning issue even though the mosque debate had taken on national significance with Republicans such as Sarah Palin and Newt Gingrich forcefully opposing it. Obama publicly commented on the issue only after Bloomberg delivered an impassioned supportive speech and after the plan cleared a final city regulatory hurdle.
It's a tricky issue and not just because of the emotional nature of the attacks executed by terrorists from Muslim countries. Americans view Muslims far less favorably than other religious groups. Obama has set a welcoming tone even as the Christian president has been falsely accused by conservative critics of secretly being Muslim or foreign-born.