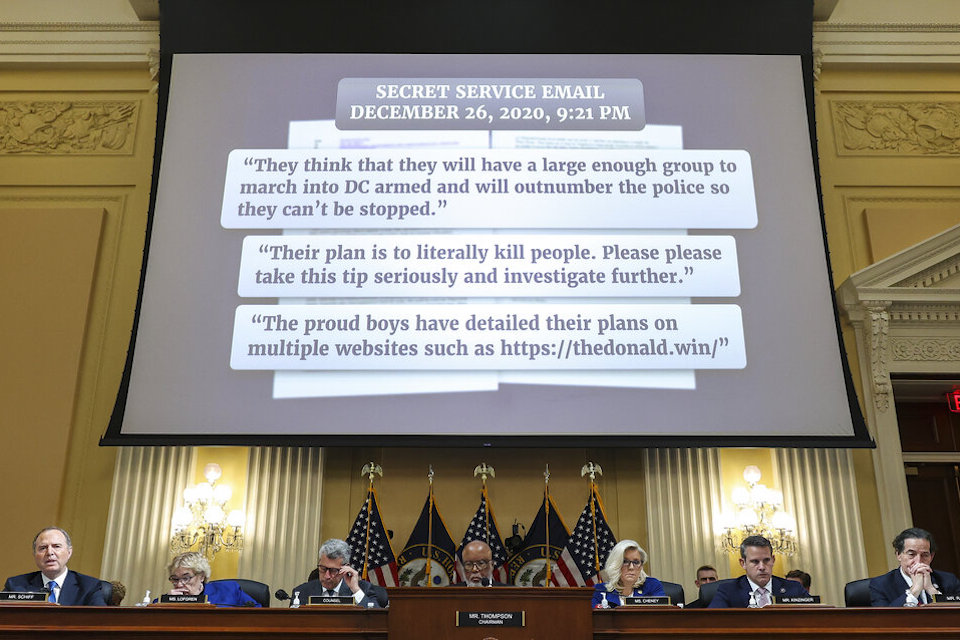 WASHINGTON (AP) — In an extraordinary step, the House Jan. 6 committee has voted unanimously to subpoena former President Donald Trump — a final effort to get the full story of the Capitol insurrection as the panel wraps up its work by the end of the year.

Trump still does not acknowledge the “former” in front of “president,” and he has been relentlessly hostile to the investigation. He called it a “charade and a witch hunt” in a letter to the committee on Friday — but notably did not mention the subpoena or say whether he would comply with the demand for his appearance.

The attempt to compel Trump's testimony comes as the committee is tying together multiple investigative threads and compiling its final report. The panel is only authorized through this Congress, which ends on Jan. 3.

A look at what’s next as the panel sprints to its finish:

The nine-member committee has interviewed more than 1,000 witnesses, including many of the former president’s top White House aides. And they have laid out a detailed timeline of Trump’s efforts to overturn his 2020 election defeat — including his inaction as his supporters stormed the Capitol on Jan. 6, 2021. But they still want to hear from Trump himself.

Now that a subpoena has been authorized — on Thursday — it must be delivered in writing to Trump. That step, expected early next week, will set a date for an interview and lay out requests for documents.

Trump and his lawyers will then decide how to respond. He could comply, negotiate with the committee, announce he will defy the subpoena or ignore it altogether. He could also go to court and try to stop it.

If Trump doesn’t comply, the panel will have to weigh the practical and political implications of a vote on holding him in contempt of Congress. If the full House voted to recommend such a charge, the Justice Department would then review the case.

The committee has taken that step with some of Trump’s allies who refused to comply with subpoenas, including Steve Bannon, who was convicted of contempt in July. But holding a former president in contempt would be another matter, an exceptional step for any Congress.

In his letter on Friday, Trump repeated his false claims of widespread election fraud and said he was writing to express “anger, disappointment and complaint” that the committee wasn't investigating his claims. He also took the opportunity to boast anew about the size of the crowd that gathered for his speech near the White House on the morning of Jan. 6, before he sent them marching to the Capitol. He included aerial photographs. He said nothing about the subpoena.

Even if he does comply, there's reason to doubt that Trump's appearance would help the investigation. He did respond to some written questions from special counsel Robert Mueller during the probe of Russian cooperation with his 2016 campaign. But his answers produced little or nothing to advance the investigation. More recently, he appeared for a deposition by the office of New York State Attorney General Letitia James — but invoked his Fifth Amendment right against self-incrimination more than 400 times in refusing to answer questions.

The committee is still talking to lawyers for former Vice President Mike Pence, as it has been for months. But it is unclear whether the lawmakers will subpoena the vice president or ask him for testimony.

Several of Pence’s aides have talked to investigators, some providing great detail about his movements and state of mind as he resisted Trump’s pleas to object to the certification of electoral votes that day and try to overturn their defeat to Joe Biden and Kamala Harris.

Video shown Thursday at the committee’s final hearing before the midterm elections showed Pence coordinating with House Speaker Nancy Pelosi and Senate Democratic Leader Chuck Schumer for help as the rioters were inside the building, some of them calling for Pence's execution. The leaders were working with security officials to ensure that they could return to the Capitol and certify Biden’s victory.

The committee will also have to decide whether to refer any allegations of crimes to the Justice Department. While federal prosecutors are conducting their own investigations into Jan. 6 and Trump’s efforts to overturn the election, the congressional committee has its separate, massive trove of evidence.

Lawmakers on the panel have hinted multiple times over the past year that they will issue criminal referrals. At the hearing on Thursday, Wyoming Rep. Liz Cheney, the committee’s Republican vice chairwoman, said that the panel “may ultimately decide” to do so. She said they have “sufficient information to consider criminal referrals for multiple individuals.”

While such a referral would not force any action, it would amplify the political pressure on Attorney General Merrick Garland as the department pursues its own probes.

The committee recently received more than 1.5 million pages of documents from the Secret Service. But lawmakers say they still don’t have everything they want.

The panel is working to verify the accounts of White House aides who described Trump’s actions on Jan. 6 as he tried to go to the Capitol and accompany his supporters, hundreds of whom eventually broke in. Security officials, along with many White House aides and GOP members of Congress, were vehemently opposed to the idea. Trump was livid and tried, ultimately unsuccessfully, to go to the Capitol anyway, according to several accounts aired by the committee.

California Rep. Pete Aguilar, a Democratic member of the panel, said the lawmakers “will be recalling witnesses and conducting further investigative depositions” based on the Secret Service material. The agency has not turned over text messages that it says were deleted.

The panel’s expected final action will be a massive report laying out evidence, findings and legislative recommendations to ensure nothing like Jan. 6 ever happens again. But it’s unclear how much of its investigative material will be released to the public.

In one of eight hearings last summer, Maryland Rep. Jamie Raskin, another Democratic member, said, "We have only shown a small fraction of what we have found.”

Lawmakers have made clear that the report will lay out what they view as the stakes for the country as many Republicans still believe, falsely, that the 2020 election was stolen and as Trump considers another run in 2024.

“With every effort to excuse or justify the conduct of the former president, we chip away at the foundation of our republic,” Cheney said at the hearing.