Mamie Till Depiction Seen as Tribute to Black Female Leaders 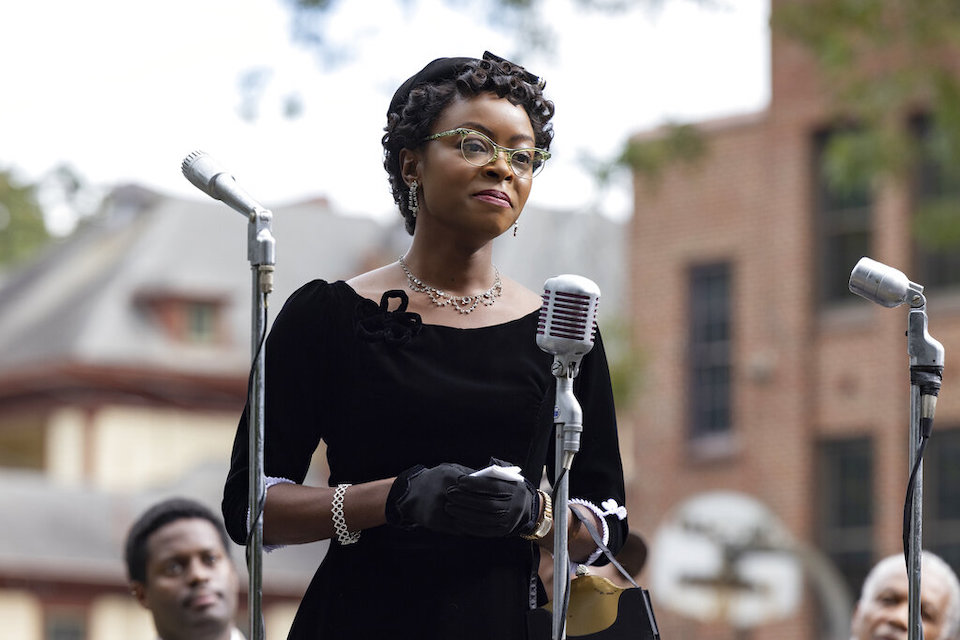 NEW YORK (AP) — Gwen Carr sat up straight in her seat as she heard lines of dialogue delivered by the actor portraying Mamie Till-Mobley, the mother of Emmett Till, a 14-year-old Black boy whose lynching in Mississippi in 1955 catalyzed the U.S. civil rights movement.

“As I watched that film, I became Mamie Till,” Carr said last month at a private advance screening of “ Till,” the Orion Pictures and United Artists biopic that debuted Friday as the first ever feature length retelling of the historic atrocity and Till-Mobley’s pursuit of justice for Emmett.

Carr is the mother of Eric Garner, a Black man held in a fatal chokehold by a New York City police officer in 2014, during an encounter that began as an arrest for alleged unauthorized sale of cigarettes. His videotaped final gasps for air, viewed millions of times around the world, was an early flashpoint of the Black Lives Matter movement. She demanded that her fellow countrymen not look away or dismiss Garner as another casualty of an unjust policing system, but to instead see him as a reason to reform that system, similar to Till-Mobley’s message.

“I’ll tell anybody, ‘A mother can tell a child’s story better than anybody else,’” Carr said. “And that’s what she said in that movie.”

As “Till” debuts, the studio and production companies behind the film have partnered in a campaign to recognize Black women and Black mothers who are continuing Till-Mobley’s legacy and fight for justice, equality and equity. From civil rights and politics to business and performance art, the campaign includes events and screenings in select cities across the U.S. that honor the courageous works of Black women whose contributions have historically been overlooked, deemphasized or made a footnote.

Codie Elaine Oliver, a filmmaker and co-creator of the Oprah Winfrey Network docuseries “ Black Love,” was a featured speaker at a screening event on Tuesday in Los Angeles, along with TV personality and writer Natalie Manual Lee, who hosts the YouTube series “ Now with Natalie.” Both women are mothers to young Black children and said Till-Mobley’s story guides the work they do in their respective fields.

“I try to live every day, recognizing the pain of my ancestors, parents and grandparents, by being a storyteller who consciously showcases (Black people) as loving husbands and fathers and mothers and wives,” Oliver said. “I have not experienced what (Till-Mobley) experienced, but I recognize that any of us could, especially as Black mothers.”

In the late summer of 1955, Till-Mobley put Emmett on a train from Chicago to visit with his uncle and cousins in her native Mississippi. Much like Black women and men today give their children “the talk” about navigating traffic stops and other encounters with police officers, Till-Mobley warned Emmett that he was visiting a place where his safety depended on his ability to mute his outgoing, uncompromising nature around white people.

“Self-assured, confident about a future without limitations, he must have gazed out at the wide-open spaces of the Mississippi Delta in amazement,” Till-Mobley wrote of her son in a 2003 memoir co-authored with Christopher Benson. Emmett was “completely unaware of the boundaries that had begun to close in on him as soon as he got off that train.”

In the overnight hours of Aug. 28, 1955, Emmett was taken from his uncle’s Mississippi home at gunpoint by two vengeful white men. Emmett’s alleged crime? Flirting with the wife of one of his kidnappers.

Three days later, a fisherman on the Tallahatchie River discovered the teenager’s bloated corpse — one of his eyes was detached, an ear was missing, his head was shot and bashed in. Till-Mobley demanded that Emmett’s remains be taken back to Chicago for a public, open casket funeral that was attended by tens of thousands. And at the trial of his killers in Mississippi, which ended in their acquittals, Till-Mobley bravely took the witness stand to counter the perverse image of her son that had been painted for jurors and trial watchers.

Throughout the film, Till-Mobley is portrayed as a woman full of a sense of foreboding about sending her only child away to a place plagued by racial hatred. But her immense love for Emmett overpowers her pain and grief, at least enough to find a sense of purpose and meaning. In a 1995 interview with The Associated Press, 40 years after her son’s lynching, Till-Mobley, a woman of faith, said God had sent Emmett to Earth for the special assignment of waking up the nation and the world.

“The humanity and the brilliance of her, and how selfless of her as a Black woman to have stepped into this role as a figure of mourning and possibility,” said Danielle Deadwyler, who portrays Till-Mobley in the film. “If she did not have the courage to do that, then we would not have known, and the world probably would not have known, the ramifications of racism. She made us all aware.”

The mission to spread Emmett’s story, as only a mother could, had immediate impacts. The civil rights movement gained momentum. Rosa Parks, the civil rights figure arrested for refusing to give up her seat for a white passenger on a segregated bus in Montgomery, Alabama, in December 1955, said she was motivated that day by the injustice in Emmett’s case. And a decade after Emmett’s death, Till-Mobley’s involvement in the movement helped spur passage of landmark federal civil rights and voting rights legislation.

Till-Mobley died of heart failure in Chicago in 2003, ahead of the release of her memoir. All told, the impact of her civil and human rights advocacy has spanned over six decades. In March, after numerous failed attempts in Congress over a 120-year span to make lynching a federal crime, President Joe Biden signed the Emmett Till Anti-Lynching Act.

The example of Till-Mobley’s sacrifice and persistence continues to fuel Black women like Lee, the YouTube host.

“I think that there was a bridge between fear and faith for her and, in that in-between, she grabbed on to courage, strength, grace and mercy,” Lee said. “That convicted me. She wasn’t waiting on anybody else. She used what was in her hands to fulfill the call on her life.”

Nse Ufot, CEO of the New Georgia Project, a nonpartisan civic engagement organization working to increase voter participation among historically marginalized Georgians, said “Till” is a long overdue “thank you” to Black women who have been inspired by Till-Mobley’s story.