FedEx: Mass Shooter Was a Former Employee of the Company 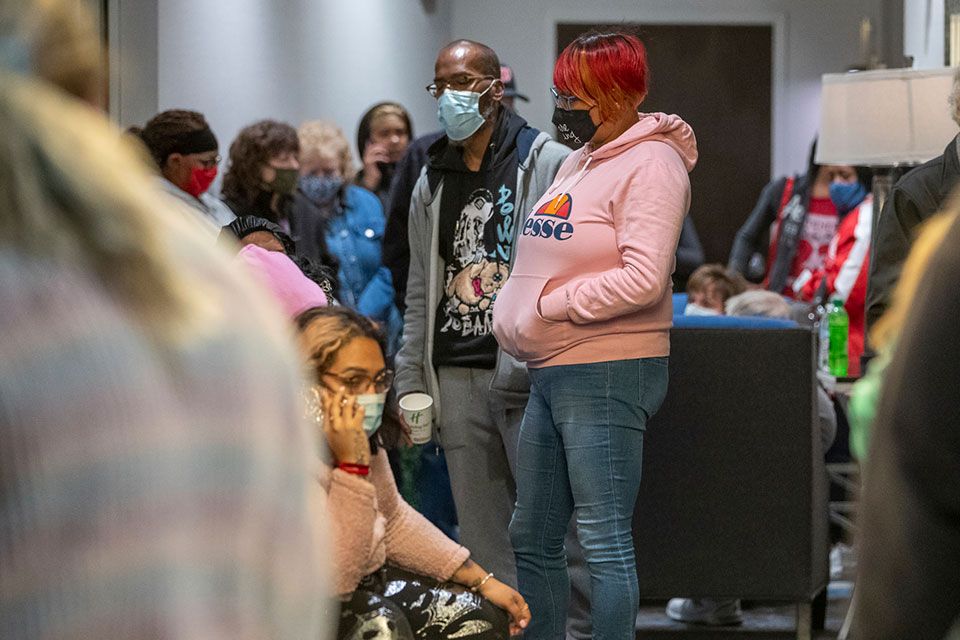 INDIANAPOLIS (AP) — The man who police say fatally shot eight people at a FedEx facility in Indianapolis is a former employee. FedEx spokesperson Bonny Harrison released the information Friday. She says company officials can’t speculate on a motive but are working closely with investigators.

INDIANAPOLIS (AP) — Police scoured a Fedex facility in Indianapolis and interviewed scores of witnesses Friday in search of a motive for the latest mass shooting to rock the U.S., as family members of the eight victims spent agonizing hours waiting for word on their loved ones.

Authorities identified the shooter as a young man in his 20s. They said they could not yet say why he opened fire with a rifle late Thursday night at a FedEx processing center near the Indianapolis airport.

Police Chief Randal Taylor also noted that a “significant” number of employees at the facility are members of the Sikh community. Taylor spoke from a hotel where family members are awaiting word on their loved ones. He says he will stay with the families until they get more information. 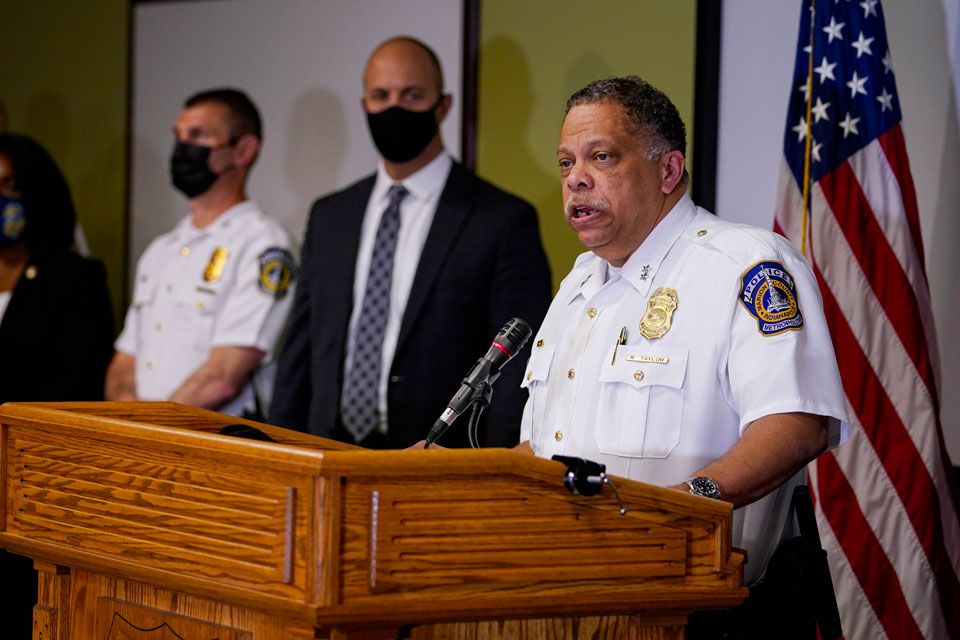 “There was no disturbance, there was no argument. He just appeared to randomly start shooting."

McCartt said four people were killed outside the building and another four inside. Several people were also wounded, including five taken to the hospital.

The carnage took just a couple of minutes. “It did not last very long,” he said.

Officials with the coroner's office said they had not been able to get to the scene to identify the victims because evidence is still being collected.

Families wait to hear from loved ones

The families' agonizing waiting was exacerbated by the fact that most employees aren’t allowed to carry cellphones inside the FedEx building, making contact with them difficult. 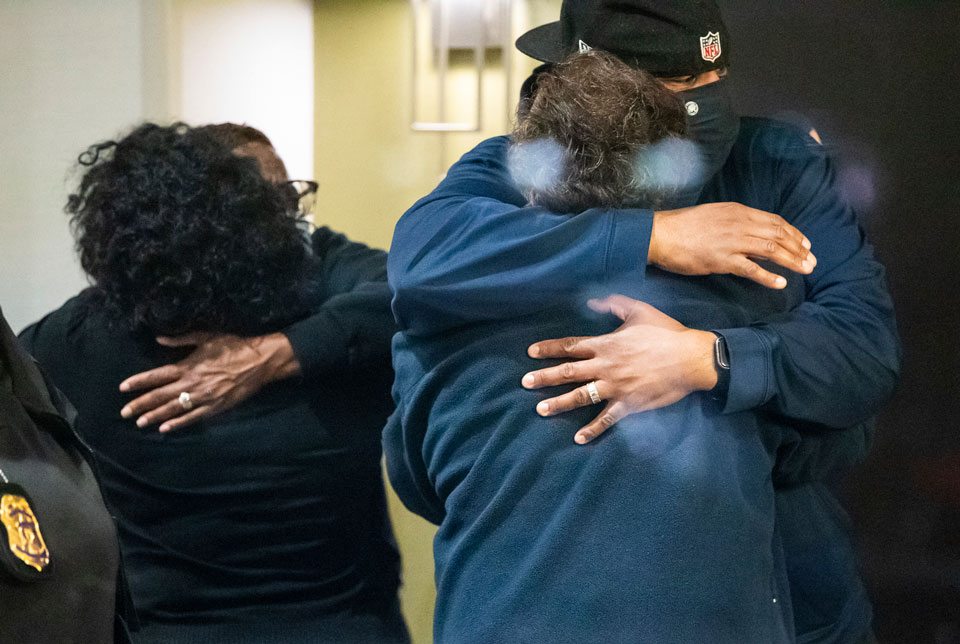 People hug after learning that their loved one is safe after a shooting inside a FedEx building Friday, April 16, 2021. Multiple people were shot and killed in a late-night shooting at a FedEx facility in Indianapolis, and the shooter killed himself, police said.(The Indianapolis Star via AP)“When you see notifications on your phone, but you’re not getting a text back from your kid and you’re not getting information and you still don’t know where they are … what are you supposed to do?” Mindy Carson said early Friday, fighting back tears.

At 11:30 a.m., Carson said she had just heard from her daughter, Jessica, who works in the facility. She said her daughter was OK and she was going to meet her, but didn't say where.

It was the latest in a recent string of mass shootings across the U.S. Last month, eight people were fatally shot at massage businesses across the Atlanta area, and 10 died in gunfire at a supermarket in Boulder, Colorado.

It was at least the third mass shooting this year in Indianapolis alone. Five people, including a pregnant woman, were shot and killed in January, and a man was accused of killing three adults and a child before abducting his daughter during at argument at a home in March. 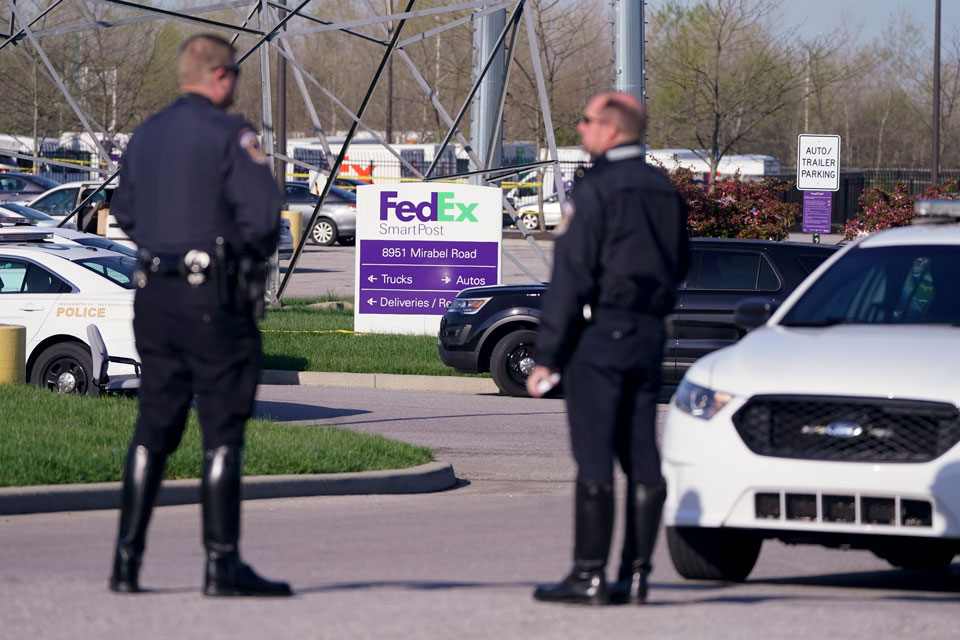 Law enforcement confer at the scene, Friday, April 16, 2021, in Indianapolis, where multiple people were shot at a FedEx Ground facility near the Indianapolis airport. (AP Photo/Michael Conroy)Indianapolis Mayor Joe Hogsett said the community must guard against resignation and “the assumption that this is simply how it must be and we might as well get used to it.”

President Joe Biden said he had been briefed on the shooting and called gun violence “an epidemic” in the U.S.

“Too many Americans are dying every single day from gun violence.

"It stains our character and pierces the very soul of our nation,” he said in a statement.

House Speaker Nancy Pelosi said she was “horrified and heartbroken” by the shooting and called for congressional action on gun control.

“As we pray for the families of all affected, we must work urgently to enact commonsense gun violence prevention laws to save lives & prevent this suffering,” the Democratic leader said in a tweet. 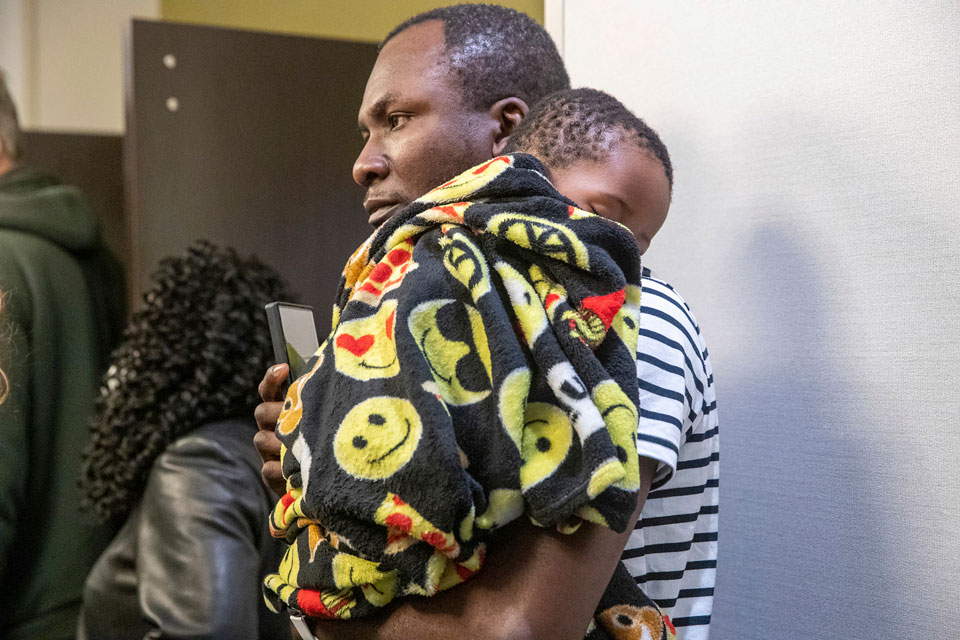 Family members await information about their loved ones who work at the FedEx facility in Indianapolis where a mass casualty shooting occurred late Thursday, on Friday, April 16, 2021. (The Indianapolis Star via AP)A witness said that he was working inside the building when he heard several gunshots in rapid succession.

“I see a man come out with a rifle in his hand and he starts firing and he starts yelling stuff that I could not understand,” Levi Miller told WTHR-TV. “What I ended up doing was ducking down to make sure he did not see me because I thought he would see me and he would shoot me.”

Gov. Eric Holcomb ordered flags to be flown at half-staff until April 20, and he and others decried the shooting, with some noting how frequent such attacks are.

Chris Bavender, a spokesperson for the FBI’s Indianapolis office, said that they are helping the police with the investigation.

A man told WTTV that his niece was sitting in the driver's seat of her car when the gunfire erupted, and she was wounded.

“She got shot on her left arm,” said Parminder Singh. “She's fine, she's in the hospital now.”

Casey Smith is a corps member for the Associated Press/Report for America Statehouse News Initiative. Report for America is a nonprofit national service program that places journalists in local newsrooms to report on undercovered issues.