There's Still No School, But There Will Be a Washington High School 40th Class Reunion 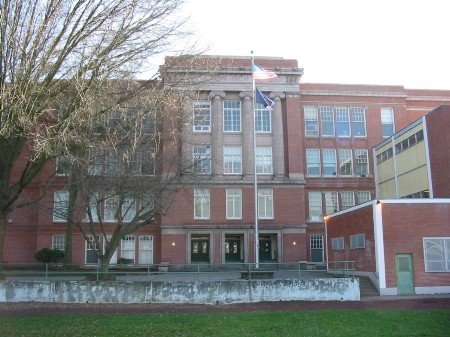 It's hard enough to organize a 40th class reunion. But when your school has been closed since 1981, the task is even harder.
Washington High School alum Charlene Myers Zaharakis has taken it upon herself to bring old copies of the high school newspaper around Portland to jog the memories of anyone who went or who knows anyone else who went to school in the all-but-abandoned building.
She and a few old pals hope a lot of folks will show up for the reunion party from 6 to 10 p.m. this Saturday at Clyde's on Sandy Boulevard – but it seems people still haven't heard about it.
Partly, she says, it's because the student community scattered when district officials voted to shut the school down.
"It's like when the parents sell the family home in a way, it's even worse though because you have a lot of people feeling that," she says. "Our history has been decimated in a way."
Graduates include beloved figures from Nobel Prize-winning scientist Linus Pauling to The Skanner News' own jazz columnist, the late Dick Bogle. 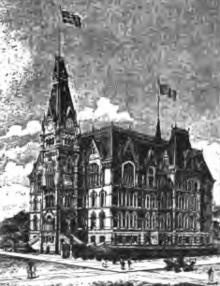 Originally built in 1906, Washington was once one of the most ornate and respected schools in the city. Acxcording to its Wikipedia page, the school's original four-story gothic splendor burned to the ground in 1922. Rebuilt in brick, Washington gained a gym in 1947, and merged with Monroe High School in the late 1970s.
Soon after, declining enrollment and weakening financial support for public education led Portland Public Schools to resolve on shuttering several high schools.
Ultimately Washington-Monroe, John Adams, and Andrew Jackson High Schools closed in 1981 and Adams reopened years later as Whitaker Middle School (itself demolished in 2006).
(Find alumni information for Adams at www.johnadamsportland.com, and for Jackson at http://www.classmates.com/directory/school/Jackson%20High%20School?org=7044)
Throughout the 1970s African American students from inner-North and Northeast neighborhoods were bused to Washington; though an embattled group, they created important institutions there including a Black Students Union.
Those years certainly created bittersweet memories for some alumni. Zaharakis says closure of the school hurt the city, the students and their families in ways still felt today in the recent talks on closing Jefferson High School.
"I think what it does is disperse communities more, it dissipates them, you don't have that neighborhood feeling, you don't have that sense of going home to someone, and I think that's what a lot of people emotionally are feeling when people are talking about closing their schools," she said.
"They have that sense of community, that's where their children have grown up, and then the parents get to know the other parents, there's this common bond that people have grown up with, and you don't have someplace to go home to."
One thing Zaharakis and others want to know is what happened to all the school's memorabilia. While it appears some of it was sold off by the district – including the school's complete yearbook selection, reportedly bought by the Portland Police Department (an alum tells the story of how he accesses it on the school's alumni website), it remains unclear where the old trophies, photos and memorabilia are now.
Shelby says much of the furniture was placed back into the district's circulation and is probably being used elsewhere.
However rumors abound about particularly cherished items – such as the trophy marking the Washington High Colonels' 1968 state basketball championship win.
"One of my friends went to school there, and his father taught there, and he was trying to find the lectern that his father had taught from," she says.
"All the achievements and the history just aren't honored or valued. We don't know where all the memorabilia is – the trophies, the yearbooks, we're trying to piece all of this together," Zaharakis says.
"I had older people asking me to ask, where is everything?"
Today the Washington High School alumni have created a vibrant website, www. wahicols.com, and a Facebook page.
Meanwhile, the building is set to stay abandoned at least until the economy improves.
While last year a string of meetings were held to investigate the possibility of redeveloping Washington High School – now owned by the City of Portland – into a community center, officials elected not to put on the ballot a bond measure that would have possibly funded it.
"It was one of quite a few projects that would have been considered for that bond if we had gone forward with it, but because of the economy right now the decision was made not to go forward with that," said Beth Sorenson, city parks spokeswoman
"It's now – it and all of our other capital projects like that – are simply waiting until we can go forward and get a funding source, like a bond in the future."
Dozens of community members met last year to brainstorm possible uses for the old building and the large lot next to it. For awhile, an unnamed developer entered into talks with the city to rehab it into a condo development – but the suitor backed off because of a bad market, said Portland Public Schools spokesman Matt Shelby.
Meanwhile, the stately brick structure is home to the annual fall event by the Portland Institute for Contemporary Art, the Time Based Art Festival. Performances are held there Sept 9-19, with art installations through Oct. 19.
"But the building, I think, belongs to the people, it belongs to the community, and it should be made into something that would be more mindful, and more honoring the school and all the people that have gone through there, and given back to the community," Zaharakis said.
"What I would like to do with that building would be like buying a brick, and people could donate money to it, and classrooms could be named after their favorite teachers, and money could be donated to it."
For more information on the school, the reunions, alumni stories and lots of vintage photos, go to www.wahicols.com.