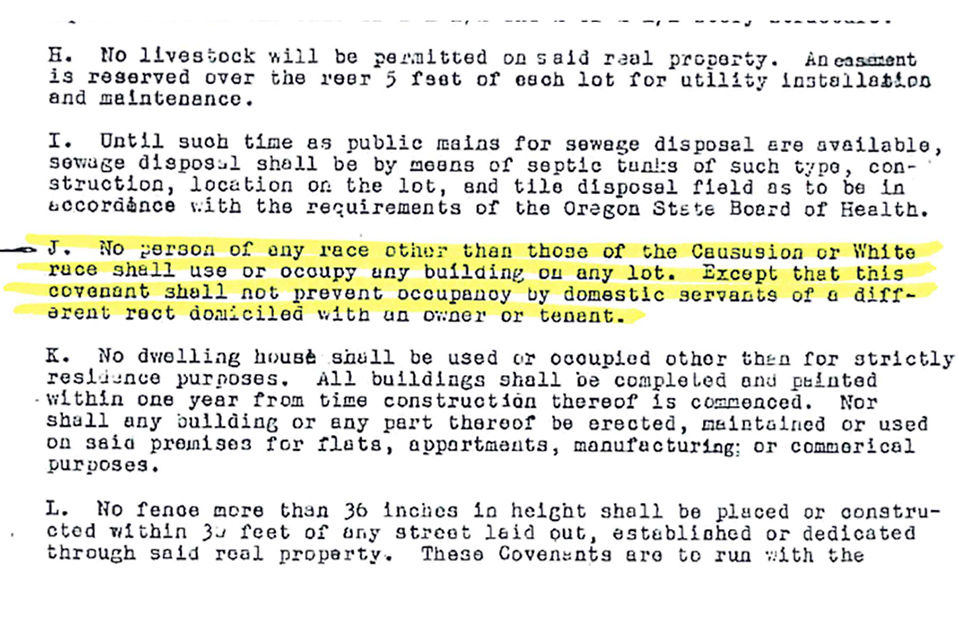 This week the Oregon Legislature passed a bill that would make it easier to remove racist language from property deeds.

House Bill 4134 passed out of the Senate Monday and heads toward the governor’s desk this spring. Under the new law property owners would be able to remove discriminatory restrictions in their deeds by petitioning their county’s circuit court with no fee.

The bill’s sponsor, Rep. Julie Fahey (D-West Eugene and Junction City), drafted the bill after buying a house in Eugene and discovering the property deed said the house could only be sold to “members of the Caucasian race.”

“I went back and forth with the realtor and the title company to see if it could get that language taken out,” she said. She discovered the process was “time consuming and expensive” and not very accessible to someone who could not afford a lawyer, partly because the process requires that all owners of record be notified.

Richard Rothstein, a research associate of the Economic Policy Institute and a fellow at the Thurgood Marshall Institute of the NAACP Legal Defense Fund and of the Haas Institute at the University of California (Berkeley), writes in the 2017 book, “The Color of Law: A Forgotten History of How Our Government Segregated America,” that restrictive covenants were common in housing deeds through the mid-20th century and were part of a system of legal tools that kept neighborhoods segregated and prevented African American families from owning homes and accruing wealth.

On their face, the contracts were difficult to enforce, as original owners were unlikely to take action should their former house be sold to a family of color. White homeowners formed neighborhood associations which enforced the deeds instead.

“Between 1935 and 1955 W.E. Boeing, the founder of Boeing Aircraft, developed suburbs north of Seattle. During this period and after World War II, the South Seattle Land Company, the Puget Sound Mill Company, and others constructed more suburbs. The builders all wrote racially restrictive language into their deeds. The result was a city whose African American population was encircled by all-white suburbs,” Rothstein wrote.

The book also notes that local governments aggressively promoted restrictive covenants and that the Federal Housing Administration gave higher ratings to mortgage applications if there were no African Americans living in the neighborhood. Although a 1949 court ruling, Shelley v. Kraemer, ruled that racially restrictive housing covenants violated the Equal Protection Clause and were unenforceable in court. Nineteen years later, a federal appeals court ruled that the covenants themselves violated the Fair Housing Act and that recording deeds with such clauses violated the 14th Amendment.

“As the court observed, such provisions, even if they lacked power, still would make black purchasers reluctant to buy into white neighborhoods if the recorded deeds gave implicit recognition of the racial prohibition and gave an official imprimatur to the message that the purchasers should not live where they were not wanted,” Rothstein wrote.

The Skanner invites readers to share their experiences with restrictive covenants in Portland. If you have a story to share, please write to news@theskanner.com or call (503) 285-5555, ext. 503.