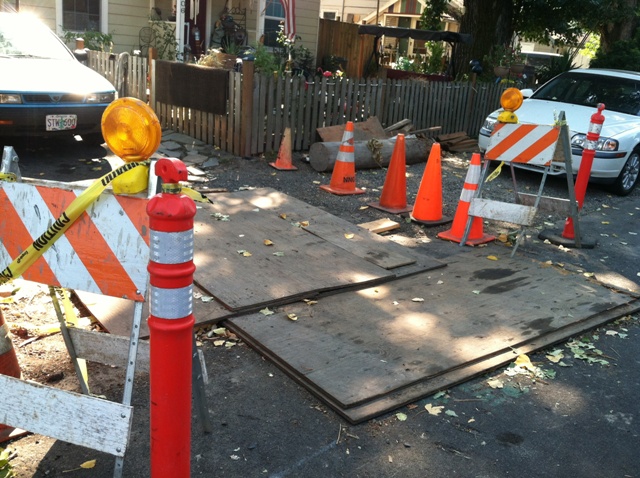 Say the words “homeowners’ association” and eyes tend to roll. The steady stream of news about the privatized neighborhoods, run by resident boards of homeowners, ranges from mafia takeovers to DNA tests on dog poop. In our two-year look into homeowner associations and their affiliated businesses, The Skanner News heard many stories about simple disputes that led to eye-popping legal costs; some residents have even lost their homes. After the City of Portland stepped up to repair the aging water and sewer infrastructure in the tiny Snoozy's Hollow neighborhood in Northeast Portland, some of the pipes began bursting again -- but residents have nowhere to go for help with consumer complains in their HOA.

Firstly, Kraft’s pro bono attorney from the Stoel, Rives law firm argued that the HOA was responsible for repairing the original leaky pipe when she moved there in 2010. The HOA’s attorney countered successfully that the repair only benefitted Kraft – and that is why she should have to pay it.

However, the City of Portland in 2011 bailed out Snoozy’s HOA over an estimated $100,000 past-due water bill – a product of those same leaky pipes, which had sent untold-gallons of water into the dirt. Up until 2011, every single home was on the same water main, so if one home’s pipe was leaking, every homeowner shouldered the cost. It’s not completely clear why or for how long the water bill hadn’t been paid; the current management company did not come on board until 2006, and the non-payments predate that.

After negotiating with the HOA board, the city knocked the water debt down to $60,000 and placed  $10-15,000 liens on every home in Snoozy’s to pay it off; the city installed new water meters for each home, an upgraded sewer system and road improvements.

Meanwhile, in their lawsuit, the HOA’s attorney argued that Kraft’s decision to stop paying her assessments was indefensible whether she received any services from her management company or not, because, under state law, “The Association need not Prove that it Provided Anything of Value to Defendant to Collect Assessments,” (sic). (This principle was also just upheld by the Illinois Supreme Court)

Even now, Kraft’s voices rises to a yell when she talks about it.

“What do the assessments go towards? How can the HOA make all of us pay for the past unpaid water bill from before I even lived here? How do we know they are paying it now?”

In fact, Water Bureau officials last week confirmed to The Skanner News that in September of 2012 the HOA’s past-due water bill was referred to a collection agency “for possible recovery,” where it remains.

In the beginning, Kraft wrote letters to former Portland City Commissioner Randy Leonard, who led the Water Bureau; then former Mayor Sam Adams, and every member of the Portland City Council. They told her there was nothing they could do.

Then she wrote the Multnomah County Commission, Gov. John Kitzhaber, members of Congress and Oregon state legislators, and more recently to Mayor Charlie Hales. But almost everyone has sent her away because, they say, they have no jurisdiction.

Kraft’s experience is unfortunately typical of the nightmare faced by homeowners around the nation who fall behind in their HOA fees or, God forbid, decide to protest the management by refusing to pay.

All homeowners association experts agree: Never, ever get behind on your assessments, no matter what.

That’s because Oregon and Washington, like other states, allow HOA law firms to shift all their attorney fees to homeowners if the firm is involved in collecting on a lien. In Kraft’s case, legal documents show the law firm representing the HOA charged $100 and more for individual phone calls, $450 for a site visit to the HOA, and hundreds of dollars to send emails and conduct online searches.

University of Chicago law professor Evan McKenzie, an HOA expert and author of “Privatopia: The Rise of Residential Private Government,” stresses that the law firms are not the bad guys – but the industry is evolving with few brakes on the sky-high fees that firms can charge.

In an interview last year, McKenzie described the efforts some states have launched to cap the financial devastation such legal fees can have on homeowners.

“I just testified last week before the Maryland State Senate, there’s a bill they’re considering right now to limit attorney fees in these cases because of the abuses,” McKenzie said.

An emerging trend in the industry is that many HOA law firms are themselves also collection agencies that offer their services to HOAs to recover their own fees that they imposed on homeowners, on the HOAs’ behalf.

So the same firms that prosecute alleged deadbeat residents get unlimited ability to rack up legal charges in the lawsuit which they then act as the collections company to recover -- racking up even more late charges.

Other states are acting to limit the amount of legal fees that HOA law firms can rack up, but so far no such move has been made in Oregon or Washington.

A growing field of firms specialize in this and do nothing else. Among them are some of the most respected law firms in the country.

One in the Pacific Northwest, Vial Fotheringham, spends significant time and resources on educating the everyday people who serve as HOA board members. The firm holds regular, free-of-charge trainings several times a month for its clients on useful issues like Residential Landlord Pitfalls and How to Avoid Them, featured in mid-April. They also hold longer-format “comprehensive” trainings for board members; one attended by The Skanner News last year in Vancouver involved hundreds of homeowner and condo-owner association board members from across the region in a lively question and answer exchange led by its dynamic young law team.

Vial Fotheringham is also the law firm representing Snoozy’s Hollow HOA against Kraft; the lien on her house is mostly to recover the cost of the firm’s legal fees. Since Kraft owns her home outright with an inheritance, for her the loss means she can’t afford to get into another home.