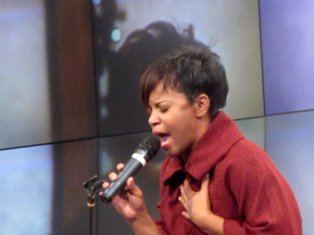 Singer, author, playwright and actor Lady Kitty Griffin will be bringing a double dose of entertainment to Portland in January. Griffin's musical play about the struggles and solutions of strong Black women, "Emerge: 7 Women, 7 Stools" will kick off a national tour on Jan. 28 and 29 at Portland's Winningstad Theatre. She will also be singing and performing for The Skanner's 25th annual Martin Luther King Jr. Breakfast on Monday, Jan. 17. Tickets for the breakfast can still be purchased by calling 503-285-5555. Tickets to the 8 p.m. performances of "Emerge" can be purchased by visiting www.emergetheplay.com.

Griffin, an award-winning singer, sat down with The Skanner News to discuss "Emerge" which was co-written and directed by Delilah Rashell and is sponsored by www.theskanner.com and theskannermobile.com.

The Skanner News: Tell me a bit about Emerge: 7 Women, 7 Stools"

Lady Kitty Griffin: I wrote four monologues. In my opinion, when people ask me 'what's it about?' I ask if they've ever read "For Colored Girls Who Considered Suicide When The Rainbow is Enuf." It came out in the mid '70s from a playwright out of Berkley, an African American wrote it (Ntozake Shange). She put it up in a very small theater in the Bay Area and it ended up taking the country by storm. It ended up on Broadway. Basically it's seven women ... all their stories are very different.

We took that concept and made the issues up to date, the issues the women are facing today, the only difference is, in our play, every character has their, what I call, their "ah-hah!" moment, where she discovers really her problems are not only outside but within; where she is the master of her own faith instead of blaming others. We all have a story, all of us came from not-so-perfect families. All of us have had some tragedy occur in life. But the person that overcomes understands that it's not what happens, but what you do with what happens, and you're responsible to do something.

You have a college student who contracts AIDS. It's her first time away from home and she gets a scholarship to an Ivy League college and because she doesn't know who she is, she is looking for love and she sleeps around and catches AIDS.

You have a cancer survivor. Her story of a wonderful middle age woman who's told the news that she has cancer, she has a wonderful husband, two kids. Cancer interrupts that.

We have a grandmother who is raising her kids' kids, which is very common in our community today because of the drug and alcohol epidemic that has hit our communities. You have grandparents raising their children's children.

You have the abused woman. Which is my character. In our country, we've dealt with abuse, but globally, I would love to help in some of the third world countries where women are suffering way more abuse than we are here in America.

Then we have the house wife who loses her identity in her husband. Her whole discovery that it's ok to be married and have your own dreams, and kind of do that without splitting up the marriage.

The Hustler and the Mistress, two characters that are always frowned down upon, but they have a story. What lead them into that lifestyle and how they got out of it.

For me, it's a different pulpit, a different way to preach a message. A message of hope. It's all anchored in music. Every cast member sings and sings wonderfully. So it's entertaining and uplifting and educational. We are so excited to bring it to Portland.

TSN: How many cities have you travelled to so far?

LKG: This piece made its debut in 2008 during women's history month at the Mondavi Center in Davis, Calif. We test marketed in Mondavi. It received rave reviews. It made us decide to start taking it on the road and hopefully to Broadway.

TSN: Why did you pick these seven different personalities?

LKG: I'm an international speaker and I have my own nonprofit that services women and children and serve, Sacramento, Northen California for more than 20 years. Each time I go out to speak or serve programs that will improve the life of women and children I see the same issues.

I see the church has done a wonderful job addressing the fact that Jesus is the Christ and the whole salvation story, but nowadays the church, because of the recession, has an opportunity to address other issues that are ultimately in the living room. What do you say to the grandparent who is struggling hard to raise their children's children? What do you say to the young person who's still looking for love and AIDS is rampant? How can we help them? What do we say to the woman who's boosting to get a quick dollar? These are issues that women are facing?

TSN: How do the women tell their stories?

LKG: With in-your-face acting. Some people think it's like watching a movie, but it's true. They're all true stories. It's not like a bunch of women just talking. They're excellent actors. They're diverse. They know no color.

It was important to us to cast people who could sing. The music is strong and just as important as the message.

This play is not just for women, it's for all people. Those who already plan to attend the play, if they know women or men who are trapped in some of the roles being presented on this stage, they want to get them there, because the play provides answers. So often we talk about the problems, it's very rare that someone stands up and says, 'Here's the answer.' So, this play is for people who are stuck. They love being entertained, but they want answers. So this is a don't-miss.