Thank you all for coming, stay well and keep the dream alive.

10:14 Bernie Foster tells about The Skanner New's new technology challenges and our history. Announces the Skanner's free wifi now being beamed for a five-mile radius from our office on North Killingsworth. Talks about the need to eat well, exercise and take of yourself.

10:09 Bernie Foster. Thanking everyone. Staff. Dr Gatewood and PCC, and the sponsors. Asks people to support Sisters of the Road. Reminds people that Chris Dudley former Trailblazer who is standing for Republican gov. nomination donated large amount of money to the Dr King fund. We support people who support us. And we don't support people who don't support us.  Thanks former Sen. Margaret Carter for her service. Reminds people that the Keep the Dream Alive Celebration takes place today at Highland Christian Center, Northeast Glisan.

10:07 Rob Ingram. Thanks God. Says he never planned or thought of this. Recognizing his best friend and his wife Dana, his mother, sister, Bishop Hope and Commissioner Saltzman.

10:03 Lisa Loving takes the podium to the audio of Dr. King speaking about feeding the hungry. She is giving the Drum Major for Justice Award. This young man is organizing a mentoring group and much more. A community of law enforcement, social service workers, media and more -- a community dedicated to helping youth. Drum Major for Justice: Rob Ingram, director of the city's office of youth violence prevention. Applause.


Scholarships of $1000 given out by The Skanner Foundation to students.

9:48 Prof. Morris Collin points out that Dr King died working on issues of sanitation workers. He understood the connection between race, poverty and toxic waste.

We victimize children and the poor, she says.  There is a color line now between 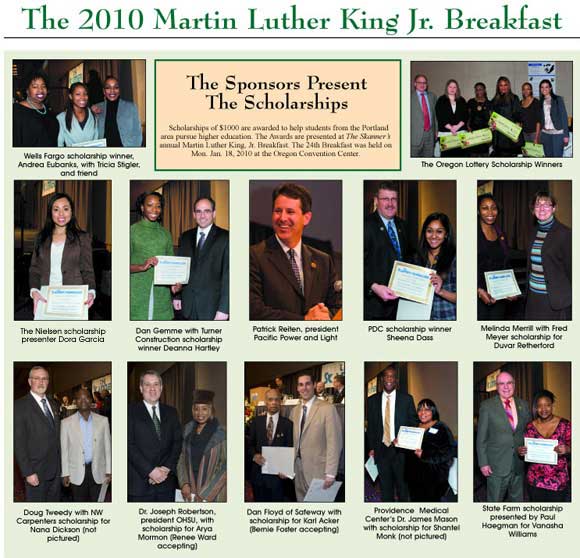 sustainability and environmental justice and that must end. Reminds us of the impact on health, and about Katrina, and how in a disaster we forget about the poor who can't afford cars, the disabled, the elderly.

I'm sure Dr. King would have urged us to do better.  Quotes Dr. King. "Let us realize that the arc of the moral universe is long but it bends toward justice."


9:45 Talks about the United Church of Christ study on toxic hazardous waste: The blacker that community is the more likely it is that they will have not just one but multiple sources of toxic and hazardous waste. Race is the biggest predictor of where toxic waste is disposed. The beginning of the environmental justice movement. scorecard.org is a good website to find out how your neighborhood compares to a rich, white neighborhood.

So often in the movement for sustainability community is ignored. That is part of the mission for restoring equity to sustainability. I think Dr King would have said we must find what is just and make that sustainable.


Sustainability is: Environment, Economics and Social Justice. We often focus on only the first two of these.

Challenges officials and the president to find a way to end the violence. There is no justice in violence.

Talks about unspent money in Washington supposed to help reduce unemployment and homeowners. What I want us to face squarely is what Dr King wanted us to face --- Arrogance and privilege and racism will kill us all. We have the means to stop this madness. What is holding us back. it is an intractable greed, arrogance and racism -- because if the beneficiaries are black or brown we seem to have trouble.

How much money would it take to end poverty everywhere. The highest number I got was about $300 million -- three years of our wars. And no children would be dying of poverty anywhere. Climate change will make these issues much worse. There is no equity and fairness in disaster and that is what we face.

9:30 Robin Morris Collin: Talking today about the relationship between Dr. King's work and sustainability. Since we lost Dr. King 42 years ago new wars, a new African American president, and new information about our world. The pathway into violence and greed has been too often taken. Signpost to violence and to greed and to the glorification of greed -- I believe Dr King would have abhorred those. 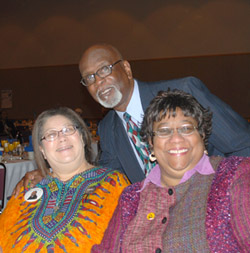 9:29 Jerry Foster of The Skanner up to introduce our speaker. Talking about Professor Collin's family history. Her ancestors fought slavery, and included a distinguished mathematician, and founders of  the first and only African-American owned shipping line.

Bobbie Foster introduces the silent auction for Haiti. Donated by the Portland Trailblazers, a signed basketball will be auctioned to raise money for the Haiti disaster.  Started with a bid of $500 from The Skanner Staff.


Slideshow of The Skanner's 35 year history. Photos of neighborhood people, politicians and the neighborhood as it used to be.

John Jackley of the PDC says its development strategy is founded on a vision of social equity. What if we did have equity, social justice and empowerment/ well we're working towards that. We have a new PDC and it stands for people, diversity and empowerment.


Pat Reiten of Pacific Power also sitting at podium: Talking about development in North Portland and the legacies we leave.  Presents scholarship of $1000 to Shikara Lowe a health and science student at Georgetown University.


9:06 Peggy Ross from the governor's office of civil rights speaks. Gives Gov. K's apologies and reads proclamations in honor of Dr. King and also for The Skanner News Group. 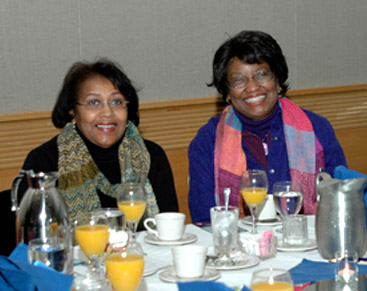 Rep Blumenauer: Talking about President Obama: I continue to admire someone who tells us that his focus is not on the next election but on the next generation.  President Obama accepted the Nobel Peace prize to show america would be a partner in creaitng peace and solving problem of climate change. Says America is now again the most admired country in the world. Applause.

Talking about the  challenges we are facing in  healthcare.  And about how each of us can go on to honor Dr. King. Talks about The Skanner's story about changing Union Avenue to Dr. Martin Luther King Jr. Boulevard.

Rep Blumenauer. Talks about Haiti. We must be part of the recovery of that country and it must be a sustainable recovery. 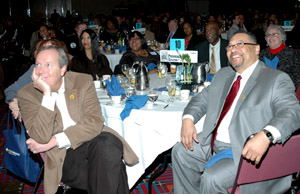 8:57 Rep Blumenauer: Last year at the inauguration people were electric with hope: As Sarah Palin would say "You could see health care from there."

Sen. Wyden: I believe now the great challenge is to go forth from this hall and reflect on Dr Kings uniqe talent for bringing us together --- with the spirit that Dr King showed us and gave his life for --- we wouldn't spend our time shouting at each other but coming together.

system is not sustainable if we rack up those kinds of debts. We have to come together and fix it. It can't be resolved on a partisan basis and by people yelling at each other.
Reflecting that Dr King might say we could get beyond this wrangling. Define our lives not by our differences but by areas where we can agree. Reach out to those we disagree with.
I think Dr King would have been passionately involved in the issue we will address today—sustainability.

Sen Wyden speaking: I think it's important for us to recognize that in this community there is a long honor roll of people stepping up. Big round of applause as he thanks Bobbie and Bernie Foster for their work in creating the breakfast. Talk about the  challenge we are facing: What is it going to take to get those hopes (that Barack Obama laid out just one year ago at the inauguration) turned into reality in 2010 and I believe that that's what Dr. King would like us to do.

Bobbie Foster is welcoming us all. She says she thinks of us as Dr King's beloved community, talks about Dr. Kings's ideals of equality and brotherhood.
Now gospel singer Madam Wendy Jackson is leading the assembly in "Lift Ev'ry Voice". 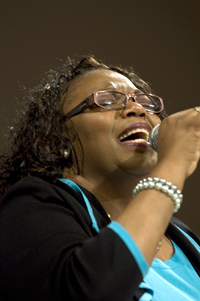 8:34 Les Femmes have organized our escorts for the event – a group of wonderful young people who have volunteered to help. Marcus Mundy's daughter is one of the group.

8;20 Oregon Rep. Earl Blumenauer is asking Multnomah County Chair Ted Wheeler how he is doing after his skiing accident. Rep. Blumenauer is wearing a green bicycle pin on his suit. Chair Wheeler says he has started doing some strength training.


7 a.m. The Skanner Publisher, Bernie Foster has been here since 6:30. He's putting little bottles of olive oil on the tables. Since discovering the Mediterranean Diet, Bernie has been a convert to the health benefits of extra virgin olive oil. Denise Peterson from PCC is sitting beside me at the back of the ballroom finalizing the table placements. Vo Minh and his crew from the North Portland Multimedia Training Center are setting up. All of sudden it feels more relaxed in here. Then I realize it's because gospel singer Madam Wendy Jackson is doing her sound check. 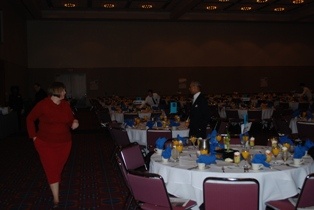 The 24th Martin Luther King Breakfast kicks off this morning at 8:30 am. The Skanner staff and a team from the North Portland Multimedia Training Center have been onsite at the Oregon Convention center since 6:30 a.m. to make sure everything is ready.
The Keynote speaker, Robin Morris Collin, an author and environmental law professor at Willamette University, is expected to speak about environmental issues during the breakfast. At this early hour people are arriving and meeting up with friends and colleagues in the reception area.