By Helen Silvis of The Skanner News
Published: 21 January 2013

10:38 Benediction and close.  In the words of Martin Luther King, "Keep us we pray in perfect peace"
10:35 Oregon Lottery gives out prizes.

10:32 Bernie Foster: Sign our petition on the We The People website.... We need a Marshall Plan for Black America. Sign it... it's a bit like voting in Florida... you have to be persistent but it works. ...
"We want to remind everyone that the World Arts Foundation's "KEEP ALIVE THE DREAM" tribute to Dr. King will be starting at 11a.m. in a new venue: the New Beginnings Conference Center on NE 172nd Place (off Sandy Blvd.)And the Red Cross is holding its annual Dr. Martin Luther King, Jr. Blood Drive today from 1:30 PM at the Donor Center on North Vancouver Ave.

10:30  Bernie Foster throws down a challenge:
"Anyone who's been here before knows I always like to throw down a challenge. And this year I have a challenge that you can rise to today.  Dr. King fought many battles and one of his battles was to end POVERTY and make sure every family has a roof over their heads, food on their tables and a chance to be successful in life.
Well, we know that battle is still going on. For Black Americans, the wealth gap, unemployment rates and poverty have gone UP –not down –during the last few years.
That's not because we don't want to build wealth, put in an honest day's work or send our children to college. It's because America has not lived up to its promise of equal opportunity for all.
That's why we're asking President Obama to take action to right this wrong. After World War 2, the Marshall Plan rebuilt much of Europe. What we need is A MARSHALL PLAN FOR BLACK AMERICA.So this morning –On Dr Martin Luther King's holiday and President Obama's inauguration  we put up a petition on the White House, "WE THE PEOPLE" website. And if we get 100,000 signatures in the next 30 days, we will get the president's attention.

10:24  Announces the Skanner will soon have a new website. 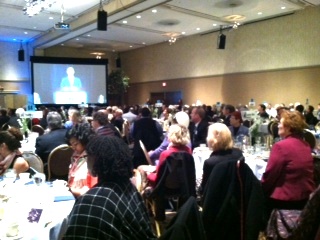 10:21 Talks about  Chuck Washington of the Portland Observer, who passed away last month.
Thanks everyone who came today. You could have been anywhere but you came here. Thank you.
"Thanks Joe McFerrin. Thanks to you. Because of you many young people will go to college.
Thanks sponsors for supporting students. Thanking staff, media partners, PCM and KBOO.
Last, but not least, I want to thank our accomplished speaker Dr. Irma McClaurin who gave us something to think about and work on as we go forward.
10:19 Brings her granddaughter up on stage. Sarah Henderson is a freshman at California State University. Introduces her grnadfather Bernie Foster to wrap up event.

10:15 Drum Major for Justice Joe McFerrin: Wow! Thanks Bobbie and Bernie for being role models in community. "I'm super excited about expanding our services to kids and families in East Portland. Thanks his wife Lisa, his family, parents, board and staff at POIC. "This award is for you. It's your hard work every day that gets the job done."
10:14 News editor Lisa Loving presenting the Drum Major for Justice Award
"In the spirit of Dr. King's final battle, the War on Poverty, This year's Drum Major for Justice is an individual who has worked to bring education and job training to some of the most disadvantaged people in our community. As the president and CEO of the, our honoree has worked for almost 20 years to build work training programs for youth using corporate and community partnerships. In his free time he has earned a masters degree in Public Administration from Portland State University and served on the governing boards of many nonprofit organizations. A few years ago under his management POIC extended services to students up to age of 25 with new programs for college support. Two years ago POIC won funds to offer more services to the families of students and work trainees, to advocate for a better level of support at home. This year, the POIC is building a second center in East County.The Skanner News 2013 Drum Major for Justice is Joe McFerrin of the Portland Opportunities Industrialization Center and Rosemary Anderson High School.
The ultimate measure of a man is not where he stands at times of comfort and convenience,,,

10:10  Bobbie Dore Foster:
"I have a special surprise acknowledgement to make. It is to two women who have blazeda trail working with business owners and now have a clients throughout the United States.  When we started the Skanner in 1991, we knew we needed guidance, They worked with Bernie and I and our staff to develop our mission – Challenging people to shape a better future now. And on our values: , my favorite being: Excellence is achievable every day. They have worked with us for 22 years and we want to publicly acknowledge them for their leadership and guidance over these years. Their company is Continuous Breakthroughs. Karen Carnahan and Marsha Gunter  This plaque is an appreciation for leading The Skanner through continuous breakthroughs. "

Patrick Quinton, executive director of the Portland Development Commission presents a scholarship to Rachel, the sister of the recipient, Georgetown University student Deanna Hartley. Quinton says if we want to create Dr. King's dream we have to move people who have been left out to the front of the line. Says PDC has adopted the most comprehensive equity policy in the agency's history, since last year's breakfast.
Unemployment for African Americans is "shamefully high" in Oregon.  "I don't see a more pressing issue to address than this one." Says since Mike Green spoke last year, the agency is moving to make real change.

9:40 "We must encourage our youth to have vision and curiosity around technology.  We must instill in them the firm belief that they are capable of transforming this world in their life time.  We celebrate Dr. Martin Luther King, Jr.'s birthday today because it inspires us to believe that anything is possible, including the transformation of an entire country.  Dr. King guided us do it during his short lifetime.  We can continue his legacy and do it again.  He asked us once, "What kind of country do we want?"  Our answer should be an America that is equal and delivers on its promise of life, liberty, and the pursuit of happiness for ALL its citizens."

9:36  Keynote speaker Dr. irma McClaurin: Is there a glimmer of hope?
"In 15 months, we completed a 21,000sf renovation of the facility for the first Urban Research and Outreach Engagement  UROC.  It became the symbol of progress and movement towards a collective vision of change.  It was technologically a state-of-the-art facility that would house programs committed to improving the lives of people living in North Minneapolis.The most notable accomplishment was receiving a $2.9M ARRA grant to support Broadband Access for North Minneapolis and other underserved communities across the Twin Cities of Minneapolis and St. Paul.  In keeping with the agenda that the University needed to demonstrate true commitment, it contributed $750K in cash and in-kind support to bring the entire project total to $3.6M. " 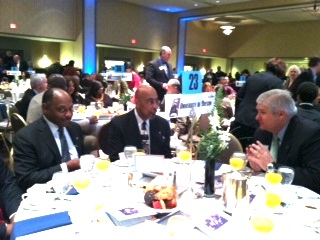 9:30 Dr.McClaurin
"How many Black children and poor children (and I link these together because historically there has been a strong correlation between being born Black and being born in poverty) lay in their beds at night and dream of changing the world? With President Obama as President of the United States, they now have a concrete role model. Steve Jobs had no idea that in changing the world, he would contribute to what has been dubbed "the digital divide" and what I sometimes call the Technology Gap.  According to Wikipedia, the digital divide "…refers to any inequalities between groups, broadly construed, in terms of access to, use of, or knowledge of information and communication technologies. The digital divide in the United States (and other countries) refers to inequalities between individuals, households, businesses, and geographic areas at different socioeconomic and other demographic levels."

9:27 Dr. Irma McClaurin:
"How can we tolerate the fact that more than 20.5 million Americans live on less than $11,000 a year for a family of four -- half of the federally defined poverty level? That means living on just $7.55 a day. What's worse is that the quality of life of these poorest Americans resembles that of people in the world's least developed countries.Americans value fairness. Yet 20.5 million Americans are born into and ensnared in a poverty trap, never getting a fair break. What has happened to America's promise that everyone get access to life, liberty, and the pursuit of happiness?"

9:24  "Although the majority of voting Americans helped to elect an African American man to guide the country for a second term, we have not established a post-racial society.  Race still matters, poverty still matters, and racism is not a figment of our imaginations.  America is walking a tight rope in which the democratic promise and social contract of equality stand at one end and poverty/limited access/and racism stands at the other.  The safety net of a denial of an authentic life, liberty, and the pursuit of happiness as a fully vested citizen is still just out of reach."

Claps from crowd as Dr. McClaurin mentions the inauguration.

We have spent decades, fought a Civil Wars, lived almost 100 years in legal apartheid from 1865 to 1965, founded a Civil Rights movement, and passed legislation to close that trap door of contradictions in the hope of restoring two documents to their grandness, the Declaration of Independence & the Constitution of the United States."

9:17 a.m. Dr. McClaurin:
"He presented America  a vision of hope.  He gave us a dream on that fateful day in 1963; he gave us a dream in which he articulated his belief in a racial equality and social justice. In his own words:" I have a dream.  It is a dream deeply rooted in the American dream. I have a dream that one day out in the red hills of Georgia the sons of former slaves and the sons of former slave owners will be able to sit down together at the table of brotherhood."

This man, this prophetic and visionary man, born also reminded us of the broken promises woven into the fabric of America's past and present, & scattered throughout its history. Dr. King reminded us on that momentous occasion on August 28, 1963, that those to whom we refer as the "Founding Fathers" of this Republic, crafted a document—their own Emancipatory document—the Declaration of Independence, in which they mapped out the premises and propositions that were the prerequisites to forming a new nation of greatness and a new vision of citizenship founded in freedom."

9:16 Emcee Bobbie Foster introduces keynote speaker Dr. Irma McClaurin. She grew up in Chicago and is known as "someone who gets things done"
9:00 Scrambled eggs, potatoes, bacon for the meat eaters, and croissants. Yum.
8:55 Frank Taylor of Portland Prime speaks to invite people to his new restaurant, Quartet, opening in February. Card on table have 20 percent discount.

At this moment President Barack Obama is taking the oath of office with his hand on the bibles of Abraham Lincoln and Dr. Martin Luther King Jr.  (CHEERS)
"Dr. King was a warrior for justice and peace fot all people. And he was especially concerned about the poor, those who struggle for their daily bread, shelter and clothing…. Those who are homeless or hopeless. They were always in the forefront of Dr. King's consciousness. Many of you have already read our special MLK edition, which is devoted exclusively to this issue. And we will address the needs of poor and unemployed people later in this program…"

8 a.m. Guests are gathering in the lobby outside the Grand Ballroom.