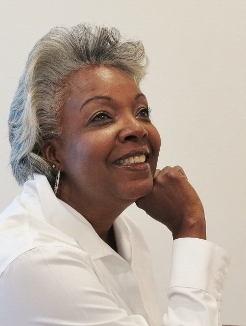 Irma McClaurin Ph.D., who has blazed trails as an anthropologist, an author, poet and a university administrator, will give the keynote address at The Skanner Foundation's 2013 Dr. Martin Luther King Jr. Breakfast.

"We are delighted to have a speaker of her caliber come to Portland to talk to us about the impact of broadband and what is happening in other parts of the country, and the world," said Bernie Foster, publisher of The Skanner News.

Among McClaurin's many publications are: three books of poetry; "The Civil Rights Movement & The Future of Black America"; and "Women of Belize: Gender and Change in Central America". McClaurin also edited the landmark anthology: "Black Feminist Anthropology".
And as culture and education editor for www.insightnews.com of Minneapolis, McClaurin has written about everything from Michelle Obama to her travels in Paris.

She's also got more degrees than you have room on your wall to hang them. She earned her bachelor's degree in American Studies from Grinnell College, then went on to graduate with an MFA degree in English followed by a master's and doctorate in Anthropology, from the University of Massachusetts, Amherst.

McClaurin plans to talk about Dr. King and the struggle for equality in the age of broadband technology, at the Skanner Foundation's 27th Annual Martin Luther King Jr. Breakfast at the Hilton Hotel in Portland, Jan. 21. The Skanner News spoke to her Dec. 3.

TSN: You are on the road a lot. But where are you based?

IM: I'm based in Raleigh, N.C. Raleigh is a very modern city, while Durham is a little more old-fashioned. They both have their charms.

TSN: Did you start out wanting to be an anthropologist?

IM: I started out on the creative side as a poet and a writer, because my first love was literature. Then I did a stint as an academic administrator, before going back to study anthropology. So I like to think of myself as a born-again anthropologist.

Eric Wolf, who has now passed away, used to say anthropology was the most humanist of the sciences and the most scientific of the humanities.

TSN: As a Black woman were you entering a field that was mostly White and male dominated?

IM: Well since the 1800s and starting with Caroline Bond Day, we actually do have a history of African Americans being involved in anthropology. W.E.B. Dubois, for example, worked under the label of sociology, but in effect what he was doing was urban anthropology.

TSN: What is important about the perspective African Americans bring to the field of anthropology?

IM: Anthropology as a discipline was an offshoot of sociology and the split was this: Sociologists would study, in quotes –"complex" societies, while anthropologists would study, quote, "non-complex" societies, i.e. the primitive. So what you had were people from industrialized, complex societies going into non-industrialized societies and trying to understand them. So it was always the study of "the other."

The perspective we bring is that those of us who historically have been the subjects and the objects of anthropological research –"the other" –are now the people doing the research. So we bring, to some extent an insiders' perspective.

What we're saying is that everyone is culturally grounded. And even if you're studying someone else, you bring with you your cultural baggage. You see the world through your own cultural lens. So if that lens is one where you believe primitive people are, "less than," then that's going to shape the way you interpret the data. Even the questions you choose to ask are still shaped by the culture you come from. So this notion of objectivity is what we really challenge.

TSN: Do anthropology and sociology divide along those lines now?

IM: Anthropologists now study complex, industrialized societies. There has been a borrowing on both sides. So during the 20th century we saw the rise of urban anthropology. And one of the most noted women anthropologists that most people know, of course, is Zora Neale Hurston. She was one of Franz Boas' students, who is known as the father of American anthropology.

TSN: She's well known as an author, but not so much as an anthropologist.

IM: Zora was a Black woman from Eatonville Florida, which was considered one of the first independent Black towns in the United States. And she was the first Black woman to graduate from Barnard College.
Boas trained Margaret Mead, He trained Ruth Benedict. He trained Alfred Kroeber, and he trained Edward Sapir— all anthropologists who went on to make a name for themselves. And he trained Zora Neale Hurston at the same time.
She collected folklore, and while she is most noted as a novelist, she actually trained as an anthropologist. She's known as a novelist, which is why I am so drawn to her, but she has both a humanities perspective and a social scientist perspective.

The literary people have adopted her, but I've been trying to rescue her back and re-enshrine her in the canon of anthropology.

TSN: Have you visited Portland before?