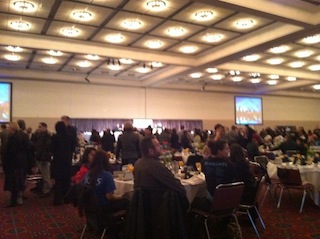 Good morning Ladies and Gentleman. My name is Bernie Foster, and I am the publisher of The Skanner. I want to thank you all for joining us for The Skanner Foundation's 26th annual breakfast to celebrate the life and legacy of Dr. Martin Luther King Jr.
Let's give some appreciation to our U.S. Senators and Representatives here today…and to all of our elected officials representing the city, the county, Metro and the Great States of Oregon and Washington.
Now to our sponsors, I want to say a heartfelt Thank You.

YOU make this event happen. 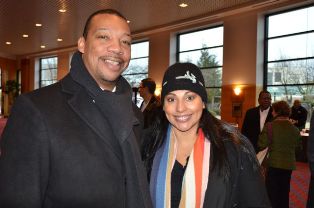 And on behalf of everyone at The Skanner, I would like to say a big Thank You to all of our readers, our friends sitting in the audience and watching on PCMs Channel 30 or on our Live Stream.
We also want to thank our keynote speaker -- Mike Green -- who has left us challenged to build a better economy for everyone.
Dr. King also left us with a challenge when he said:
"Our lives begin to end the day we become silent about things that matter."
So, in that spirit, I'm going to speak out about a few things that matter.
At The Skanner we strive to represent the voices of our community; voices that often go unheard. It goes back to our mission statement, and our set of declared values. Here's one of our values:
"What you have to say is important and you deserve to be heard."   – especially when those views are unpopular. That's why we wrote an editorial, telling people in mental health crisis, 'Don't Call the Police.'
We're pleased to see that mental health professionals will be involved in those 911 calls, when the problem is mental illness. 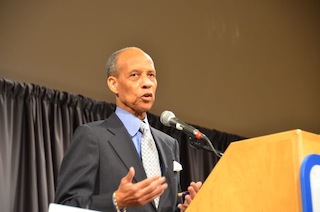 We know we didn't make that happen, but we also know that our editorial gave Portlanders something to think about.
Last fall, we covered the Communities of Color report involving Native Americans. Who understands better than we do, that communities of color in the Northwest are still fighting for true equality? And that solutions won't come until we listen to those voices in the wilderness.
By the way, that report would not have happened without Marcus Mundy's pioneering efforts while at the Urban League of Portland. 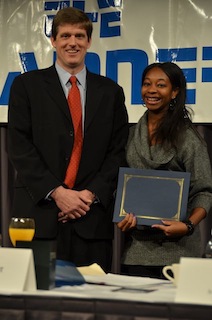 He commissioned the State of Black Oregon report in 2008, and out of that came the Communities of Color Coalition, which is now documenting the ugly race-based disparities in the Portland metropolitan area. Former President Mundy accomplished many good things. His mistakes were simply -- mistakes. We thank him and we wish him well in his future career.
This year, census figures told us that half of all Black children in Oregon are living in poverty. Gov. John Kitzhaber quoted those figures in his state of the union address before the City Club of Portland. Too many Black families -- and Native and Latino families too -- are in a desperate struggle for survival. It's bad news for the future of those children -- and for us all. Unless we turn it around.
The best way to turn things around is to make sure that parents in North /Northeast and in East Portland are working. Last year, to this breakfast we said our readers need three things: Jobs, Jobs and Jobs. That message hasn't changed. 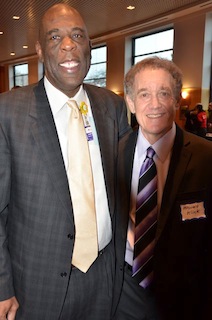 Last summer, The Skanner building on North Killingsworth Street, got a green revamp. We installed a green roof. And in December, a 5.2 kilowatt Solar panel. We plan to increase that solar power to 15 or 20 kilowatts. However, if anyone is trying to build anything in Portland you know we have this big monstrosity called the Planning Bureau. We're fighting that bureaucracy so we can install that second solar panel.
And we'll be holding an open house for anyone who wants to visitus. We want our young people to learn about this new green industry.
We've been told that hope is on the horizon for the U.S. economy. But right here in Oregon, there is a lot more that government can do to support job creation, for example, by increasing support for small businesses. Next November, Portland's voters will be asking which candidates have the will and skill to do that.
And when big opportunities, such as large construction projects, come knocking, governments can make sure that those contracts and those jobs also reach communities of color.
Equity must be at the heart of the Columbia River Crossing contracts. Senators, state representatives: You're the ones who bring in these resources. So you must keep those administrators accountable, by asking the hard questions. Are these resources reaching my constituents of color? YOU are the ones who must make equity happen. 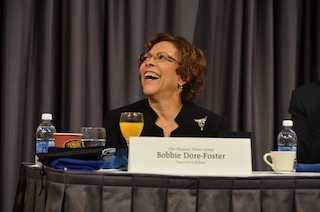 But it isn't ALL up to government. Every one of us can make a difference. Today on the Day of Service in honor of Dr. King, many of you will be heading over to Highland Christian Center and Sisters of The Road to continue the celebrations. But we know you are also volunteering this weekend.
So we want to recognize the many volunteers here today. We can't put on this event without volunteer support. And we want to recognize one organization for its commitment to volunteers: that's UNITED WAY of the Columbia- Willamette.
Jay Bloom, the interim president, Donna Harris and Carla Lee have been doing great work there. And let's welcome United Way's new president and chief executive, Keith Thomajan. Good luck with your new mission.
This weekend marks United Way's fifth annual Martin Luther King weekend of service. More than 3,000 people have signed up, to make a contribution worth $219,000. That's volunteer power. And I also want to thank them for their 2 scholarships this year. 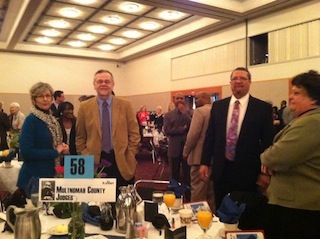 I want to mention Nan Waller, Chief Judge of Multnomah County's Family Court. Judge Waller is the architect of a new $1,500 scholarship for law students made up of donations from fellow Multnomah County Judges. We didn't get it done this year, but it's in the works for next year.

And Judge Adrienne Nelson has been working on the Roosevelt Robinson minority scholarship, which also goes to law students and helps expand the diversity of the Oregon Bar. If you are interested see the handouts in the back on the table.
Another scholarship that we couldn't get in this year is from Slayden Sundt : A joint Venture. They're the ones building the Sellwood Bridge project.

As you all know hunger is on the rise. So the contributions you are making today to feeding hungry Oregonians are more valued than ever. Last year you contributed over 800 lbs of food. So keep it coming.
The Red Cross has told me that since the Martin Luther King Jr. blood drive began 7 years ago it has collected 775 pints of blood. That translates into over 2,300 lives saved. 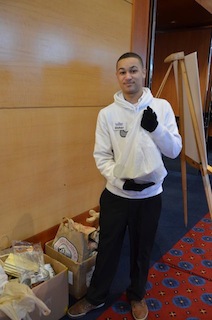 This year's blood drive will run from 7:30 a.m. to 1 p.m. Saturday, Jan. 22 at the Red Cross, 3131 N. Vancouver Ave.
I'd like to highlight the trainers and technicians who are filming here this morning. They are part of the Skanner Foundation's North Portland Multimedia Training Center. If your business or nonprofit needs a promotional video, our team can help you, and offer work experience to trainee filmmakers.
In fact, The Skanner Foundation is working on two educational projects for 2012:
* The training center is partnering with Mt. Hood Cable Regulatory Commission to hold a short film contest called "Life in Vanport." The grand prize is $1000. Find out more on our website or stop by the training center's table in the lobby before leaving. And while you're there be sure to enter your name in the drawing.
* We're also working with the East Portland Action Plan to identify African American LEADERS in East Portland, and to help build up and strengthen those neighborhoods. We're pleased to do that work and we're going to need your support too.


Finally, let's remember our friend Rob Ingram who did such a great job for youth in this town and wrote a blog for The Skanner. He left us too soon, but he gave us the right words to celebrate Dr King. In Rob's words: 'Let's get to work.'
Thanks everybody. See you next year.