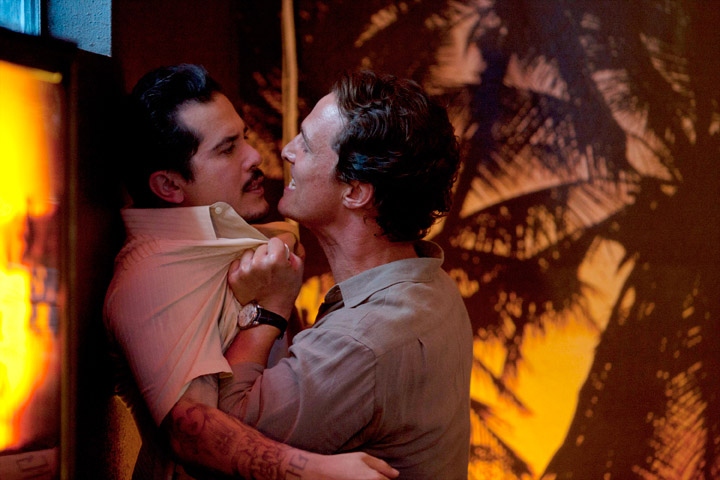 If you enjoy trying to solve a cerebral, multi-layered mystery, then get yourself to a theater to see this cleverly-concealed whodunit before anybody has a chance to spoil it for you. Based on Michael Connelly's best-seller of the same name, this intricate thriller was directed by Brad Furman (The Take) and stars Matthew McConaughey in the title role. He plays the sort of down on his luck attorney audiences just love to root for, an empathetic underdog in need of redemption reminiscent of the recovering alcoholic Paul Newman portrayed in The Verdict in an Oscar-winning performance.

McConaughey's character, Mick Haller, is a likable lush whose driver's license was suspended for operating under the influence. But because his Ford Lincoln functions both as a means of transportation and as an office, he now has a delinquent client (Laurence Mason) chauffeuring him around L.A. as a way of paying off the debt. Besides booze, he's battling his ex-wife, Margaret (Marisa Tomei), not only because they have a child (Mackenzie Aladjem) together, but because, as a criminal prosecutor, she works on the opposite side of the law.

As a defense attorney who makes "house calls" right on the street with the miscreants he's stuck with representing, mobility is critical to Mick. Given that low grade of clientele, he thanks his lucky stars the day he's told by a bail bondsman (John Leguizamo) that Louis Roulet (Ryan Philippe), the son of a Beverly Hills real estate tycoon (Frances Fisher), wants to hire him.

Mick learns that the 32-year-old heir has just been arrested for the attempted murder of a badly-bruised woman (Margarita Levieva) he picked up at a nightclub. In a meeting behind bars, Louis claims that he's being framed by a money-hungry liar who staged the attack with a couple of confederates. According to his version of what transpired, someone standing behind the alleged victim's apartment door knocked him unconscious as soon as he entered, and then planted a knife and her blood on him.

Seeing Louis' as his ticket to a higher tax bracket, Mick arranges for his release on a million-dollar bond, insisting on a six-figure retainer for what he reasonably expects to be an open and shut case. His clean-cut client's alibi is subsequently essentially corroborated by a key piece of evidence, the bar's surveillance videotape showing the accuser slipping Louis her phone number on a napkin on the night in question.

But when the assistant D.A. (Josh Lucas) sticks with his plans to put the defendant on trial, Mick asks his trusty private investigator, Frank (William H. Macy), to dig a little deeper. Soon, the plot thickens deliciously in myriad ways which it would be unfair to divulge. Suffice to say that what ensues is a deceptively-complex game of cat and mouse that's a pure delight to observe as it unravels.

Easily, the best blockbuster of the year thus far!

To see a trailer for The Lincoln Lawyer, visit: http://trailers.apple.com/trailers/lions_gate/thelincolnlawyer/