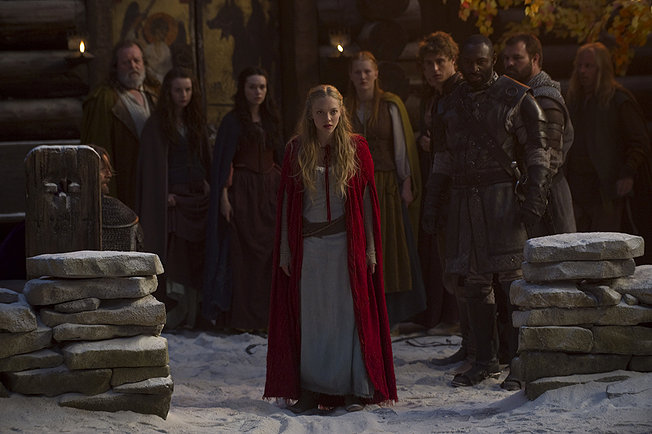 Mars Needs Moms (PG for sci-fi action and scenes of peril) Intergalactic animated adventure about a 9 year-old boy (Seth Green) who comes to appreciate his mother (Joan Cusack) only after she is abducted by Martians. Voice cast includes Dan Fogler, James Earl Jones, Billy Dee Williams and Raymond, Ryan and Robert and Ochoa.

Red Riding Hood (PG-13 for violence, terror and some sensuality) Overhaul of the Grimm Brothers' fairytale as a gothic love triangle in which a young woman (Amanda Seyfried) with two suitors (Shiloh Fernandez and Max Irons) learns that her sister has been slain under a full moon by the werewolf prowling the forest surrounding their village. With Virginia Madsen Julie Christie, Gary Oldman and Billy Burke.

3 Backyards (R for sexuality) Ensemble drama revolving around an eventful day-in-the-life of a trio of suburban New Yorkers: a miserably-married businessman (Elias Koteas) who meets a mysterious woman (Danai Gurira); a housewife (Edie Falco) who gives a famous actress (Embeth Davidtz) a ride to the ferry, and an 8 year-old girl (Rachel Resheff) who encounters a pervert (Wesley Broulik) on her way to school.

Black Death (R for profanity and graphic violence) Horror flick, set in medieval England during the outbreak of the bubonic plague, about a young monk (Eddie Redmayne) who volunteers to lead a band of mercenaries on a perilous trek to a remote region where a sorcerer is rumored to be bringing the dead back to life. With Carice van Houten,  Kimberley Nixon and Sean Bean.

Brotherhood (R for sexuality, violence and pervasive profanity) Reality check drama about a college freshman (Trevor Morgan) pressured to participate in a cover-up after a fellow, fraternity pledge (Lou Taylor Pucci) is shot during a convenience store robbery which was supposed to be the final phase of their initiation. With Arlen Escarpeta, Jon Foster and Jennifer Sipes.

Certified Copy (Unrated) Bittersweet romance drama about a British art historian (William Shimell) who rendezvous with a French antiques dealer (Juliette Bonoche) from his past while in Tuscany to promote his new book. (In French, Italian and English with subtitles) With Filippo Trojano, Adrian Moore and Agathe Natanson.

The Desert of Forbidden Art (unrated) Cold War bio-pic about Igor Savitsky (1915-1984), the curator of a secret museum located behind the Iron Curtain where he risked his life to save over 40,000 works of art from destruction by Soviet censors who only appreciated Communist propaganda.

Making the Boys (Unrated) Out-of-the-closet documentary revisiting "The Boys in the Band," the groundbreaking Broadway play-turned-Hollywood film which played a pivotal role in the rise of the Gay Rights Movement 40 years ago. Featuring appearances by Ed Koch, Tony Kushner and Larry Kramer.

Monogamy (Unrated) Romance drama about a struggling photographer (Chris Messina) who finds himself torn between his fiancée (Rashida Jones) and the attractive client (Meital Dohan) who hires him to follow her around with a camera. With Zak Orth, Ivan Martin and Madison Arnold.