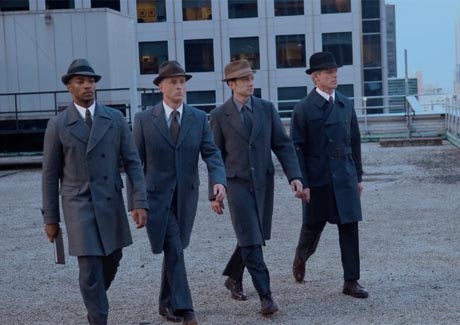 The Adjustment Bureau (PG-13 for sexuality, brief profanity and a violent image) Sci-fi thriller about a politician (Matt Damon) frustrated by fate while pursuing an affair with a ballet dancer (Emily Blunt). Cast includes Anthony Mackie, Lisa Thoreson and Michael Kelly, with cameos by Jon Stewart and Chuck Scarborough.

Beastly (PG-13 for profanity, crudeness, drug references and violence) Modern-day take on Beauty and the Beast reimagined as an urban tale about a school bully (Alex Pettyfer) who finds himself transformed into an ugly monster when a Goth classmate (Mary-Kate Olsen) casts a spell on him. To undo the curse, he must find a woman (Vanessa Hudgens) willing to love him in this hideous state. Cast includes Neil Patrick Harris, Lisa Gay Hamilton and Rhiannon Moller-Trotter.

Abel (Unrated) Coming-of-age drama, set in Mexico, about a nine year-old boy (Christopher Ruiz-Esparza) with a vivid imagination who blurs the lines between fantasy and reality when he moves back home after spending a couple of years in a psychiatric ward. With Geraldine Alejandra, Karina Gidi and Gerardo Ruiz-Esparza. (In Spanish with subtitles)

Dear Lemon Lima (PG-13 for profanity and mature themes) Coming-of-age comedy, set in Fairbanks, Alaska, about a 13-year-old girl (Savannah Wiltfong) who comes to embrace the Eskimo half of her heritage after competing in her school's Snowstorm Survivor competition. Cast includes Melissa Leo, Zane Huett and Shayne Topp.

Ex Drummer (Unrated) Dark comedy about a trio of disabled punk rockers who invite a writer (Dries Van Hegen) without a handicap to join the band, only to have the sadistic newcomer ruin the group's chemistry. With Norman Baert, Gunter Lamoot and Sam Louwyck. (In Dutch with subtitles)

The Human Resource Manager (Unrated) Adaptation of A.B. Yehoshua's novel, "A Woman in Jerusalem," about an Israeli bakery executive's (Mark Ivanir) efforts to prevent the publication of an article potentially damaging to the company's reputation, in the wake of an employee's death during a suicide bombing. Cast includes Rosina Kambus, Guri Alfi and Noah Silver. (In Hebrew, English and Romanian with subtitles)

I Saw the Devil (Unrated) Revenge thriller about a secret agent (Byung-hun Lee) who decides to take the law into his own hands by slowly torturing the serial killer (Min-sik Choi) who murdered his fiancée. With San-ha Oh, Yoon-seo Kim and Ho-jin Jeon. (In Korean with subtitles)

Old Cats (Unrated) Dysfunctional family drama, set in Santiago, Chile, about a senile senior citizen's (Belgica Castro) effort to hide any signs of her deteriorating mental state from a scheming daughter (Claudia Celedon) with designs on control of her finances. With Alejandro Sievking and Catalina Saavedra. (In Spanish with subtitles)

Take Me Home Tonight (R for profanity, sexuality and drug use) Retro comedy, set in 1988, about an underachieving MIT grad (Topher Grace) working in a video store who attempts to impress the girl of his dreams (Teresa Palmer) by telling her that he's an investment banker. With Anna Faris, Michelle Trachtenberg and Dan Fogler.