'Streetball' Documents the Bittersweet Effects of the Homeless World Cup

By Brian?stimson of The Skanner News
Published: 24 February 2011 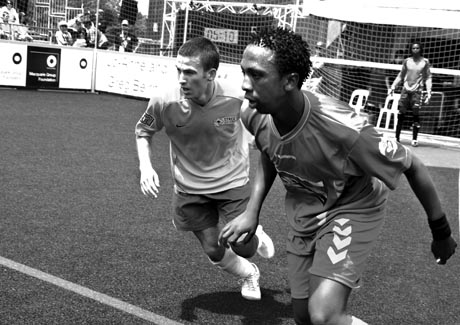 With a skeleton crew of two, filmmakers Demetrius Wren and Christina Ghubril set out to document the lives and ambitions of South Africa's 2008 and 2009 Homeless World Cup Teams. The result, the film "Streetball" will screen as part of the Cascade Festival of African Films at 7:30 p.m. on Thursday, Feb. 24 at PCC Cascade Campus' Moriarty A&H Building, room 104. Like all films for the festival, the screening is free. Visit www.africanfilmfest.org.

The event gathers teams of the homeless and excluded to engage in tournaments of Street Soccer, a universal sport that takes no more than a ball and a hard surface to play. Made up of a group of orphans, gangsters, and recovering drug addicts, the tournament provides them with a sense of purpose and shared goals, but also offers a window into a life very different from their own.

The film's director, Demetrius Wren, who will attend the screening, spoke with The Skanner News from his home in New York City about the friendships he made, the difficulties the team faced and the lack of solutions for South Africa's street kids.


The Skanner News: Tell me what kind of role the game of Street Soccer plays in the lives of the kids featured in the film?

Demetrius Wren: Street soccer is one of those universal games played all over the world. All you need is a ball to kick around and you have a game. A lot of times, they'll make a ball out of balls of trash and tie it together with plastic bags and they play street soccer.

You don't need a turf, you can play it in the dirt or in the street. A majority of these guys in the film are either orphans or they're living on the streets or coming out of a drug rehab program or are gangsters. It's South Africa's version of street basketball. That one thing where people can come together and play a sport and have a good time between some of the struggles they're going through. And it's positive. A lot of the kids who are doing crystal meth, they call it tik, or sniffing glue to pass the time or keep warm. The rules are so simple for street  soccer that its one of these things kids love to do without harming them except for the occasional skinned knee here and there.

TSN: I notice that your background is very different from the subjects in your film. Did this affect your filming or the way that you told or were told the stories in any way?

DW: I met them on another project and I realized we weren't that different. I'd go home and I'd go back to the hotel the company was putting me in and they'd go back to their shelter or whatever situation they we're dealing with. That's why I wanted to tell their story , unravel the mystery. I'd seen a lot of docs on the subject before. There was always an us/them mentality … when I was there, they were just friends of mine. We liked the same things, enjoyed the same things, cared about the same things I cared about. It was different for them because I was African American and in South Africa, it's something they idolized. I'd walk in and they'd start singing Jay-Z 's Empire State of Mind, since I was from New York, so it allowed them to open up quicker to me than someone else.

There were a lot of people coming there interested in soccer stories. It was 2008, 2009, everyone was buzzed about the World Cup coming in two years. They felt I was one of them.

I grew up with a single mother, growing up in rural Mississippi. I could relate a lot. I just happen to hit the lottery, my mom got married and that guy happened to get a really good job and so when I was 11 years old I leap-frogged social and economic standards. I felt like they were just like me except they didn't hit the jackpot when they were 10 or 11, they just stayed where they were. Things just got worse.

TSN: How did travelling to Australia for the Homeless World Cup change the attitudes or outlooks for the subjects in the film?

DW: For a lot of them, they had never dreamed of travelling, getting a  passport and for a couple of players, it didn't happen the first year. He was gearing to go and then a week beforehand, he couldn't  get it. If you can imagine, if you want a passport, you have to have a birth certificate, social security card and hopefully no criminal record. Most of these kids had at least one strike against them, if not all. Most of them had probably broken into a car at one point in their life, most, if not all, didn't have a birth certificate, so it's like a hunt to get all that. And then when they finally got to go over seas and be cheered for, I saw a part of them come out. You kind of play the part society gives you. If you're suppose do to be a roughneck street kid, you know, you're going to break into cars and be hardcore. But when you go to Australia and you're wearing a jersey and representing your country in an international tournament, I saw this maturity like they were hungry to be seen as something of value.

The hardest part though,  is having two weeks of bliss and being what you've always dreamed of being and you have to go back to Kingtown or wherever you're from and go back to how society sees you and how hard that crash is for some people. There are a couple people in the film who weren't so bad. There's one kid who was an orphan, and that's terrible, but he' s trying to finish high school, he's a couple of years behind. He's pretty bright and actually going to and from high school everyday, it kept his social IQ up.  So he was going to college, now I have some notoriety, I get a scholarship and now I'm going to community college, I'm on my way. Whereas a couple of the other guys who were just heroes ... One guy used to be a gangster, went off and helped them win the tournament in Milan, he was a hero and he comes back home and he still has all these gang tattoos. And they put their gang tattoos on their face. So if you are from South Africa and see a guy with a tattoo across his face, you think killer, gangster, thief … when he got back, he got into drugs harder than he ever has been. If you go from being interviewed by mayors and governors. He was on stage once with a famous Formula 1 driver doing a press conference. He was kind of a superstar … and then he comes back home and it just sent him off the deep end.

TSN: Are these games actually making a positive impact into the lives of the players? There was a statistic on the website that said 70 percent ended up making an improvement in their condition. But is this a positive experience long term?

DW: You have to realize, every country's economic system that creates homelessness is different. … the problem in SA is that there is no safety net to keep those kids off the street and there's no safety net when they return.

TSN: Does the tournament provide money for the participants or winners?

DW: They provide money to get the players there. … A lot of people think if you win, do you get money or housing? That's something that still isn't part of their system. I'm not sure if that's based on a funding problem or a psychology thing where it's more about working hard but at the end of the day you're responsible for putting your life back together. I don't know. A lot of audiences at the Q & As have a problem with this. They say well you won, but you still don't have a house, they don't get any money to do anything they just get a trophy and go back home?

TSN: It's kind of anticlimactic.

DW: Exactly. I think the Homeless World Cup is thinking that whatever main nonprofit is running it, they can take care of it. But of course, the people who created the HWC are from England, one of the world's richest countries.