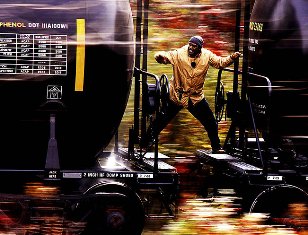 Frank Barnes (Denzel Washington) is winding down a 28-year career riding the rails with the Allegheny & West Virginia RR. Despite the lack of a blemish on his sterling record, the veteran engineer's being forced by the company to take an early retirement in a cost-cutting measure set to take effect in just a couple of weeks.

To add insult to injury, Frank finds himself partnered with Will Colson (Chris Pine), a young conductor who's recently been hired because of his union connections. It is therefore understandable that there might be some tension in the air when, because of the rookie's mistake, they end up leaving the train yard pulling a few more freight cars than intended.

However, that faux pas pales in comparison to the one simultaneously being made elsewhere in Southern Pennsylvania. For some inane reason, the world's worst engineer (Ethan Suplee) decides to jump off his slow-moving locomotive to throw a switch to direct it onto another track.

Trouble is that, before he can climb back up, the throttle inadvertently slips down into the "FULL" position and the half-mile long freight train takes off without anyone aboard. This frightful development puts the runaway diesel on a collision course with a passenger train filled with school kids coming from the other direction on the very same track.

Can what looks like certain disaster somehow be averted? Of course, that challenge falls at the feet of fearless Frank who nobly rises to the occasion after grudgingly burying the hatchet with Will while suppressing his bitterness about being fired. That, in a nutshell, is the clichéd premise established at the outset of Unstoppable, an edge-of-your-seat roller coaster ride designed with the Attention Deficit Generation in mind.

Based on actual events, the over-stimulating adventure proceeds to serve up a thrill a minute, much like the delightful, taser-like delivery of your typical computer game. Still, this star vehicle features Denzel Washington doing what Denzel does best, namely, playing a selfless stoic with good teeth in another compelling performance certain to feel oh so familiar to his loyal fan base.

Rated PG-13 for profanity and scenes of peril.