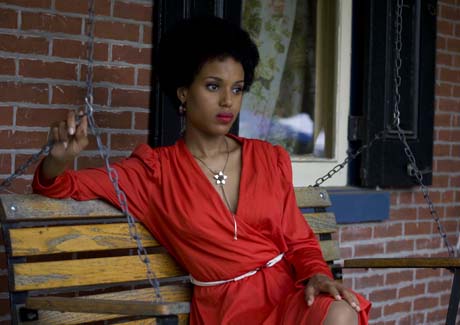 Anyone familiar with the history of the Black Panther Party knows that it self-destructed during the Seventies after the FBI strategically created dissension in its ranks via a combination of infiltration, disinformation and assassinations. In fact, by the time of the informant-riddled organization's collapse, its members were so mistrustful of each other that its leaders were reduced to accusing each other of being government agents.

That feeling of paranoia permeates the air in Night Catches Us, a period piece about the Panthers set in Philadelphia in '76. The story revolves around the return to town of one Marcus Washington (Anthony Mackie) to attend the funeral of his father following four years spent in a self-imposed exile.

The ex-Panther is not exactly welcomed back with open arms because most people in the 'hood still believe he might have been the snitch who fingered a suspected cop killer for the police. He even gets the cold shoulder from his own brother, Bostic (Tariq Trotter), who refuses to let him stay in the family house.

The only sympathetic shoulder Marcus finds to lean on is that of Patricia (Kerry Washington), an old flame who has become an activist attorney since they were last an item. But rekindling passion nonetheless proves easier said than done.

For, first of all, Patty is currently dating a bourgie Oreo who's been pressuring her to move out of the ghetto and to forget about her revolutionary, leftist leanings. Secondly, she has a nine year-old daughter, Iris (Jamara Griffin), who's growing increasingly curious about how her late daddy died. The little girl has no idea that the new man in her mom's life might be the stool pigeon responsible for her father's apprehension and mysterious demise.

Written and directed by newcomer Tanya Hamilton, Night Catches Us is an unabashedly nostalgic Black Power Movement saga of Shakespearean proportions touching on a litany of classical themes ranging from love and betrayal to honor and loyalty to disgrace and redemption. The film features an original soundtrack by The Roots, and marks a most auspicious debut by Ms. Hamilton who deftly spins a palpably-authentic tale in impressive fashion.

A Prodigal Panther pays the price to make peace with a turbulent past.

Rated R for violence, profanity and some sexuality.

DVD Extras: Deleted and alternate scenes (including an alternate opening and ending), behind the scenes footage, photo gallery, interviews with Bobby Seale and other Black Panthers, and "HDNet: A Look at Night Catches Us."

To see a trailer for Night Catches Us, visit: