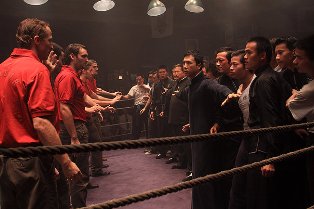 Everybody knows that the late Bruce Lee (Jiang Dai-Yan) was the greatest karate star ever to grace the silver screen. But have you ever wondered who taught him that "expert timing" and how to be "as fast as lightning," to borrow a couple of phrases from one-hit wonder Carl Douglas' "Kung Fu Fighting."

That would be the legendary Yip Kai-Man, aka Ip Man (Donnie Yen), the proponent of an ancient martial arts discipline known as Wing Chun. Bruce didn't join Ip's dojo until 1954, and this installment of the chopsocky franchise ends with a teenage Lee approaching his future sensei for lessons.

So, Ip Man 2 doesn't revolve around the title character's forging that historic relationship, but around his opening a Wing Chun school soon after his family's escape to Hong Kong from Communist China. Still, establishing that business enterprise was easier said than done, given his lack of local street cred, at least until he kicked the butt of a local thug (Huang Xiaoming).

The humbled Wong Leung becomes Ip's first protégé, and word of the existence of a competing academy eventually reaches the ears of Hong Zhen-Nan (Sammo Hung). This leads to a ballet-like battle between the two martial arts masters, as the action-oriented adventure seizes on any excuse for a skirmish.

However, all the various and sundry Asian adversaries are ultimately willing to bury the hatchet upon the arrival in town of Twister (Darren Shahlavi), the muscle-bound, World Heavyweight Boxing Champ. The Brit behemoth is very dismissive of karate and only becomes more cocky after beating a few challengers to a bloody pulp.

Like David and Goliath, it falls to relatively-modest Ip Man to save the face of both Wing Chun and China by defeating the giant foreign interloper in the ring in a no holds barred showdown which serves as the film's finale. Any martial arts flick is judged by its acrobatic fight sequences, in this case Donnie Yen proves himself a worth protagonist by convincingly and creatively dispensing wave after wave of sacrificial goons.

Bruce Lee lives! (Or at least his mentor does.)

In Cantonese, Mandarin and English with subtitles

To see a trailer for Ip Man 2, visit: