South Africa's Answer to 'The Hangover ' Arrives on DVD 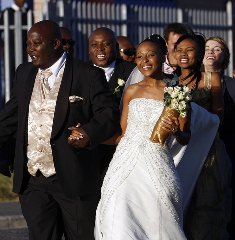 Ayanda (Zandile Msutwana) is frantically putting the finishing touches on her impending, dream wedding set to transpire in Cape Town in a couple of days. Unfortunately, the ravishing beauty just can't help herself, as she acts out like your typical Bridezilla, much to the frustration of her miffed mother (Sylvia Mngxekeza) and her flamboyant event planner.

Meanwhile, her relatively-mellow groom, Elvis (Kenneth Nkosi), is 1,800 kilometers away in Durban, where he is set to embark on what he expects to be an uneventful drive along with his Best Man. However, upon arriving to pick up Tumi (Rapulana Seiphemo), he finds the player in bed with three naked women. And although Elvis declines to participate in the impromptu bachelor party, the tone is set for their ensuing sojourn along the coast.

Thus begins "White Wedding," a wacky romantic comedy which might best be thought of as South Africa's answer to "The Hangover" (2009). The movie marks the auspicious writing and directorial debut of Jann Turner, who on a modest budget has managed to make the best road flick in the region since "The Gods Must Be Crazy" (1980).

It doesn't take long to figure out how the plot is about to thicken, for the focus soon shifts to Rose (Jodie Whittaker), an inebriated British woman they meet in a bar who's crying about having just broken off her engagement to her philandering fiancé. Over the vociferous objections of Elvis that the disheveled and disoriented White woman is bound to attract nothing but trouble for a couple of brothers driving a late model Mercedes, turned-on Tumi offers her a ride to the airport and ushers her right into the car.

What ensues is a rollicking romp, during which both Tumi and Rose catch a serious case of Jungle Fever. As one might imagine, their mutual affection doesn't sit well with everyone they encounter, such as the denizens of a redneck watering hole where a telltale Apartheid flag is still draped on the wall.

Between running from a lynch mob and having a car accident, Elvis has plenty of excuses for arriving late to his own wedding, if he only could tell increasingly-impatient Ayanda the truth about all he's been up to. "The Hangover" meets "The Gods Must Be Crazy," if you catch my intercontinental drift.

Rated PG-13 for some sexuality.

In Zulu, Afrikaans, English and Xhosa with subtitles.

To see a trailer for White Wedding, visit: